Route: From the Songwe border post with Tanzania, down the northern shores of Lake Malawi, through the central highlands, a stop-over in Lilongwe, and out of Malawi at the Mchinji border post with Zambia.

Travel Distance and Time: 754kms over four days, including two nights staying in the capital of Lilongwe.

Borders: The Malawi immigrations and customs offices at the Songwe border post with Tanzania were probably the most frustrating of all the borders we crossed on this trip. This was due to several factors, but the all-encompassing problem was the heat. Having lost elevation very quickly from the tea and coffee-growing plateaus of southern Tanzania, where temperatures stayed comfortable in the high-20s (C), we found ourselves suddenly in a 38 degree steam bath at the Malawi border.

Add in a chaotic, cramped, and un-air conditioned customs/immigration office, and you have the makings of a miserable afternoon. Bring some cold Cokes and a bucket-load of patience, as you’ll need both. In theory, the paperwork for entering Malawi is pretty simple – as it is at every border. Apply for and pay $50 (for US citizens) for your visa (we got 30 days), go right down the line to customs, and apply for your temporary import permit (or get your Carnet stamped), and pay the road use tax. Submit to a police check (cursory), and you’re on your way.

In practice, however, this was our experience:

As with many border posts in east Africa, this one has no discernible parking direction, so just pick a spot where you hopefully don’t box in one of the big long-haul trucks. The visa application and stamping-in process was fairly straightforward – we paid in USD for our visa (which most of the immigration posts appreciate), but we had to fight for over an hour to get a receipt from the payment officer. There wasn’t necessarily any shady dealings going on, the officer just wasn’t interested in doing his job. In place of the three minutes he could have taken to write the actual receipt, he elected to either ignore Julie or argue grumpily with her for an hour instead.

Over at the customs desk, I wasn’t having any better luck. When I submitted the information on Toto for the temporary import permit, the chassis number popped up in the computer system as belonging to Ben, from whom we had bought the Land Rover. They had traveled through Malawi just a few weeks prior, so our new ownership paperwork wasn’t matching their records.

However, as opposed to the immigration office, customs went out of their way to help me. And, thankfully, I had an over-abundance of paperwork related to Toto, including her old import documents from Ethiopia, a notarized letter from Ben, and a copy of his passport. With all this in hand, I managed to talk three different customs officers through the process, and, two and a half hours later, we had our TIP. 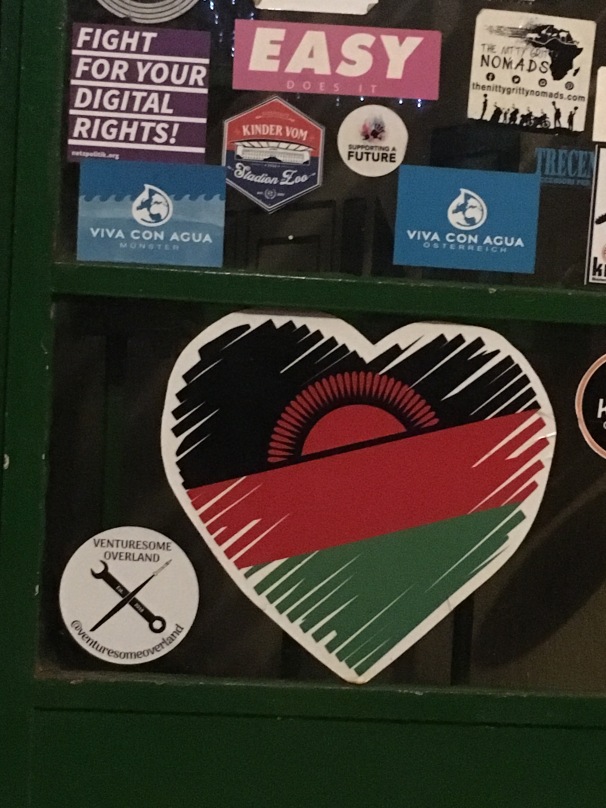 A couple of additional notes about this border – there is a bank located in the customs office, but its only function is to accept payments for customs duties, permit fees, and road taxes. They do not make change, and you can’t exchange money with them. You must pay your permit fee in Malawian Kwatcha (10,000 MWK), you must pay your road use tax in USD ($20), and you must have exact change. There are a handful of small bureaux de change located about 100 meters from the customs office – there is no ATM. On the plus side, this border seems to be blessedly free from pushy touts and runners. Very grim pay toilets can be found behind the exchange offices.

Exiting Malawi into Zambia at Mchinji was straightforward – park on the Malawi side of the police security barrier, walk into the immigration and customs office on your right, get a stamp for your passport and a cancelation for your TIP, drive through the barrier, and start the process all over again in Zambia. One thing that’s important to consider – you will need Zambia Kwatcha for many of the fees on the Zambia side, and we couldn’t find an ATM. So, if you have Malawian Kwatcha leftover, now is the time to change it – there are plenty of money changers, which you’ll need to use, since the local banks will not exchange Malawian money for Zambian money. They’re also happy to change USD, of course.

Roads: Malawi, like many countries in east and central Africa, has seen a recent influx in foreign direct investment from China. The most visible of these projects are the roads, and many of them are beautiful – wide, with generous shoulders, and passing lanes with long sight-lines. The road south from the Songwe border along Lake Malawi is especially good. Though, the way is often densely lined with huge billboards featuring the propaganda of the Chinese company that constructed the highway. It’s not for me to say whether the trade-offs for this infrastructure are beneficial or not for the host country, but one thing is for certain – nobody is pretending who builds the roads.

That said, other than the usual potholes in heavily trafficked areas, the roadways in Malawi (even the ones not built by the Chinese) were above average. The gravel and mud tracks in Luwawa Forest were also in fairly good shape, even with heavy rains. 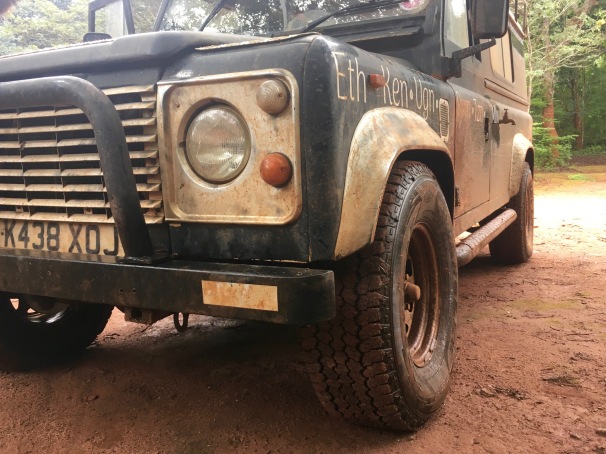 Police Stops: The police ignored us in Malawi, except the officer posted at the Songwe border gate who asked for water or a Coke (I guess we all needed one…). The stops we did encounter were exclusively immigration stops – four, to be exact. They demanded to see the visa in our passports, and we tried each time to no avail to give them stamped copies of our passports and the visa receipt we finally won at the border.

But, they insisted on seeing the real thing, which, as we mentioned before, we hate doing anywhere outside of a border post. At least they were wearing immigration agent uniforms, and carried badges. Each stop also was staffed by a retinue of Malawian security forces or police, so they do project an air of legitimacy. Much better than Ethiopia or Tanzania, where officers show up in shorts and t-shirts.

Camping: We camped in four locations during our run through Malawi – one on the beaches of Lake Malawi, one high in the central mountains among the pine trees, and two urban campsites in Lilongwe.

The Flo-Ja campsite, just a few dozen kilometers south of the Tanzania border, is situated on the grounds of a day care and pre-school that enrolls primarily orphans from the area. 90% of the camping fees are returned to the school; and, along with support from international donors, the welcoming Dutch couple who administer the place keep an impressive operation up and running. The ablutions are fantastic, and it would be a pretty sublime place to relax for a few nights – unfortunately, we only had one to spend. You can also arrange to volunteer at the school if you have a longer time to linger.

Further south, in the mountainous region to the west of Mzuzu (a great town to restock food and fuel), the road winds up through multiple layers of ecosystems into the Viphya Forest Reserve. The Reserve is managed as a timber-harvesting area, and towering conifers dominate the landscape (along with old clearcuts, and newly planted tree farms). Just 15 kilometers off the main highway is the Luwawa Forest Lodge. An old-school African wilderness lodge, it features a cozy bar and restaurant with big fireplaces, multiple chalets and rooms to book, as well as a few secluded campsites. The campsite ablutions are a bit worn, but the water was kept hot in the donkey boiler both in the evening, and, as a special treat, in the morning. Hiking and biking trails are accessible right from the campsite, and there’s fishing, too.

Lastly, in Lilongwe the first night we camped at the Woodlands Campsite, located on the grounds of the Lilongwe Wildlife Center, dropped smack dab in the middle of the city. But, the campsite is quiet, and there is plenty of room for larger vehicles. I swear I heard a bushbaby calling out in the middle of the night, but Julie is fairly certain I made it up. The final night we stayed at the Mabuya Camp, a cheerful and funky backpacker’s lodge with just a couple of campsites worryingly right next door to the bar. But they close the bar promptly at 10:00pm, and you can reach the (pre-paid) wifi right from the comfort of your tent. Be sure to hang out with the camp dogs, who are completely lovable. 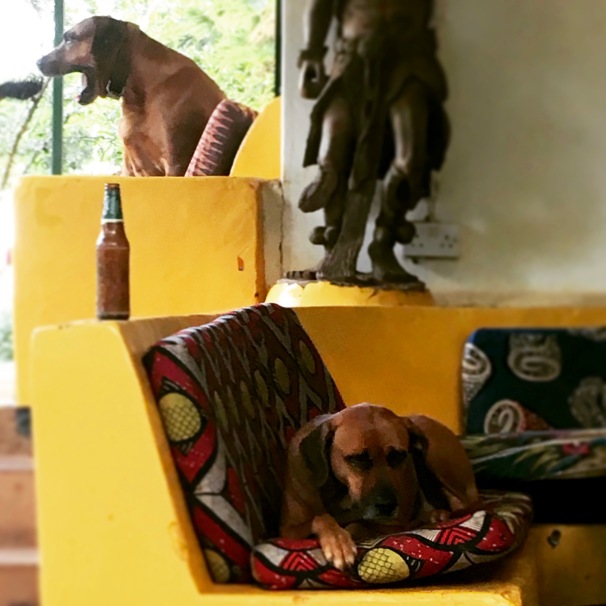 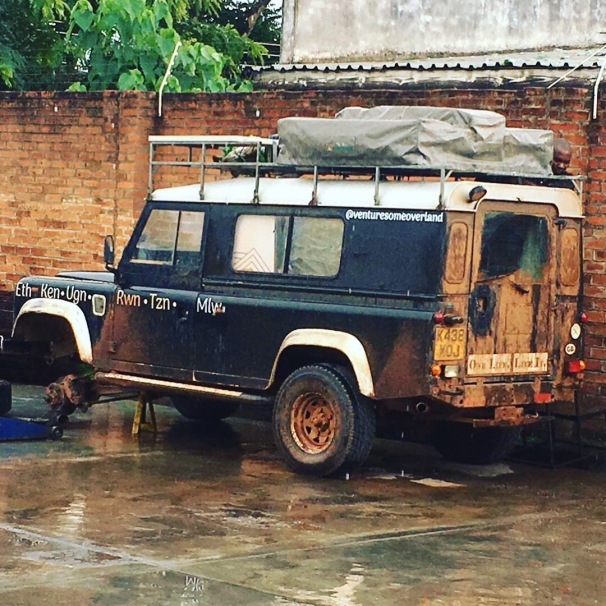 Under the knife at Costantini’s Automotive, Lilongwe, Malawi

General Comments: Malawi was far more diverse in terms of its landscapes and its culture than we imagined. Of course, the incredible Lake Malawi dominates the country, and draws the most travelers, with good reason. The beaches are beautiful and the views across the lake are magnificent. But, don’t neglect Malawi’s fascinating interior routes – there are a number of national parks and forest reserves running down the country’s central spine, and the ecology, geology, and geography are entirely unexpected. Malawians are friendly and relaxed, and we really felt like we were starting to transition culturally from east Africa back into southern Africa here. As always, a few extra days would have been nice to soak it in even more.