The Many Mountains of Montana – Beaverhead Range

Montana - the name is no mistake. 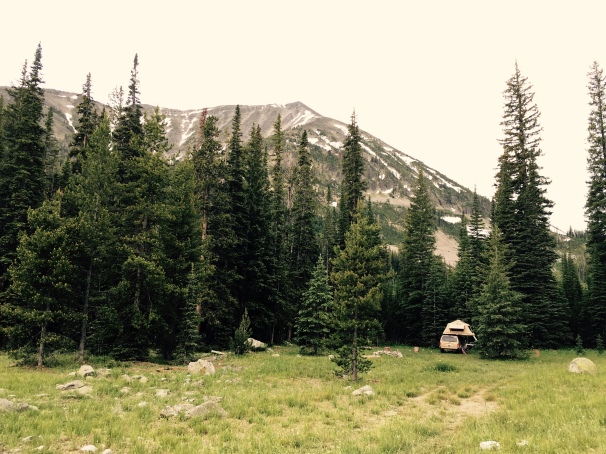 At camp deep in the Beaverhead Mountains, Montana.

Montana – the name is no mistake.

Beyond the most famous mountain ranges like the Absarokas, the Beartooths, the Bitterroots, and the peaks of Glacier National Park in the Lewis Range, there are over 100 lesser-known ranges, large and small, spread throughout the Treasure State.

From the isolated prairie peaks of Blaine County’s Bears Paw Mountains, to the sheer spires of the Cabinets, and the windswept and lonesome Crazys soaring over 11,000 feet, to the Gravellys, the Little Belts, and square-faced Tobacco Roots, to the Sapphires, the Rattlesnakes, and the Pryor Range, where one of the largest wild horse herds in North America roams its grassy heads, Montana has no shortage of ways to get an altitude fix.

It’s to these “minor” peaks and valleys that we most often escape on long weekends to the wilderness. Within 2 hours of our home-base in western Montana we can be exploring no less than 25 distinct mountain ranges on foot and by Jeep.

Thankfully, the vast preponderance of mountain terrain in our home state is public land; and thousands of miles of BLM, Forest Service, and state roads open the door to adventure and solitude.

We’ll start our exploration of the unsung mountains of Montana in the Beaverheads.

This range tops 11,000 feet in elevation and straddles the southernwestern swing of the Idaho/Montana border. It features miles of rough and primitive tracks forged into the deep valleys by silver prospectors in the nineteenth and early twentieth centuries.

One of those tracks, Big Swamp Creek Road, begins at the 90 degree junction of Peterson Lane and Swamp Creek Road in Beaverhead County. It tops out at nearly 9000′ on the slopes of Ajax Peak, well above Ajax Lake and near an abandoned silver mine (USFS Road 625). We think it may be one of the highest elevation roads in Montana outside the Beartooth Mountains. 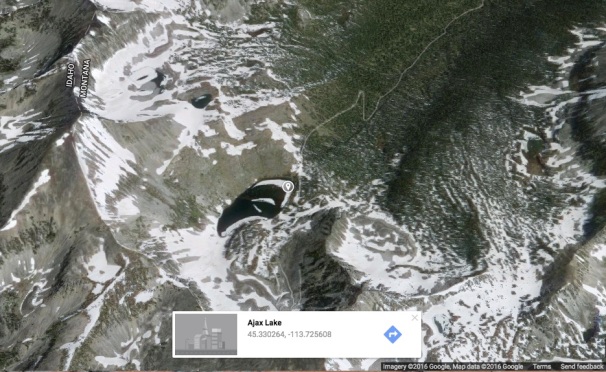 We stumbled on Big Swamp Creek Road almost by accident. Seeking refuge from insects in mid-summer Montana we fled from trailheads in the Sapphire Range, and then the Anacondas. In this part of the world, you’re usually no more than 50 miles from more mountains, so changing plans in mid-stream (sometimes literally!) is rarely a problem.

So, we cracked open the atlas and looked for the highest road in the vicinity under the theory that more elevation would mean colder temperatures, which would equal fewer insects. 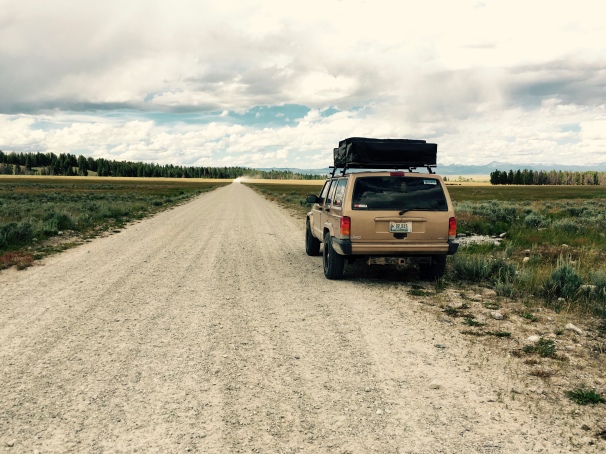 Our strategy worked. As we climbed, early July began to feel more like April and the ever-changing weather cycled through rain, wind, sun, and the occasional distant rumble of thunder. 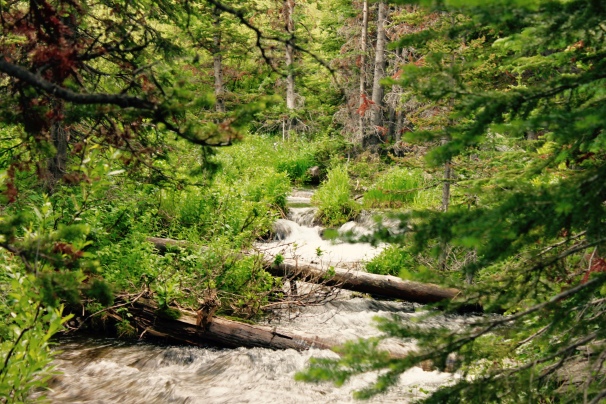 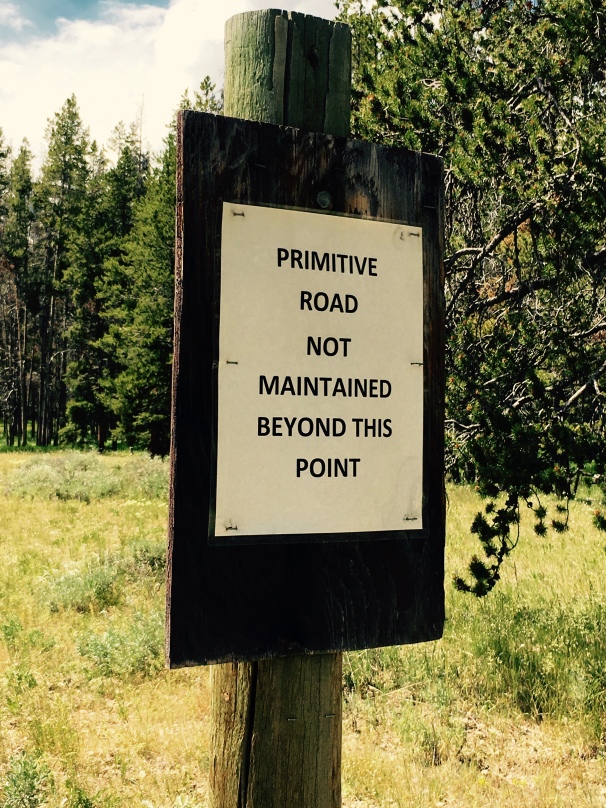 We found a dispersed campsite tucked in a grove of firs and lodgepole pines where without a doubt many had rested before. The massive (and mostly useless) fire ring signaled the presence of more recent campers – most likely fall hunting parties. The nearby ruins of mysterious structures in the woods spoke to the area’s mining history. 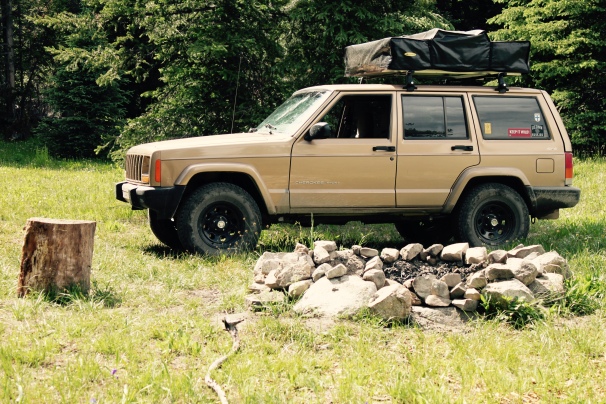 Fire Ring of the Gods. 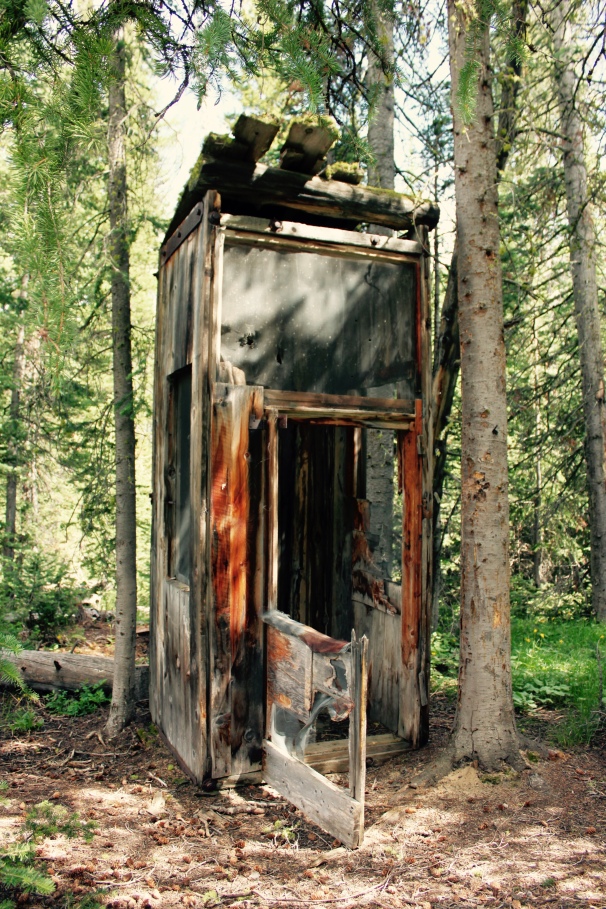 Not sure what this structure is – looked like a toll booth. 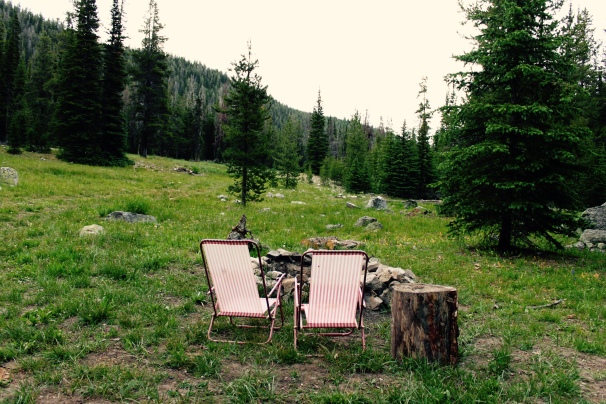 Hard to beat the views in any direction. 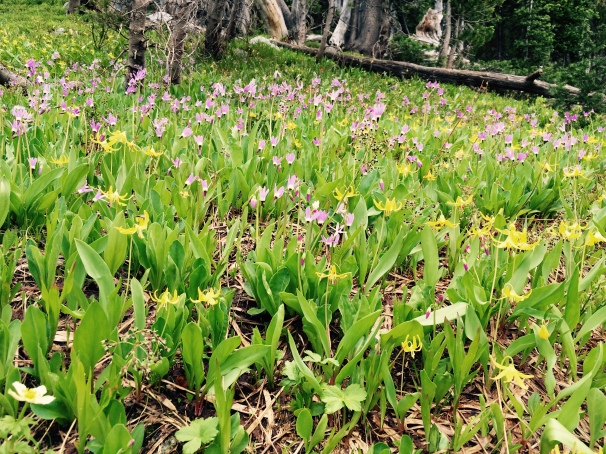 With a few hours left of daylight, we decided to explore further up the road toward Ajax Lake. The higher reaches of Forest Road 625 dead end at a silver mine that shuttered nearly a century ago. 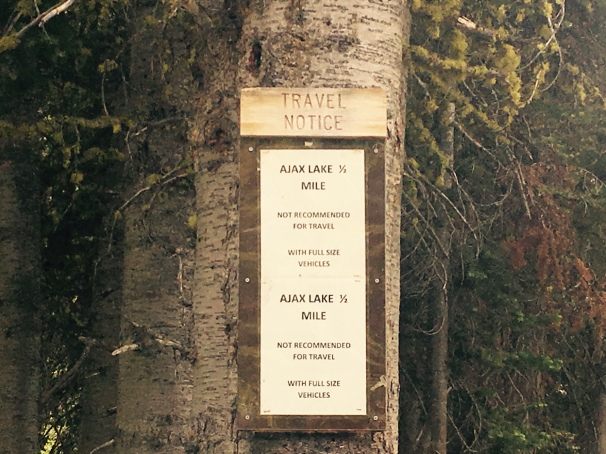 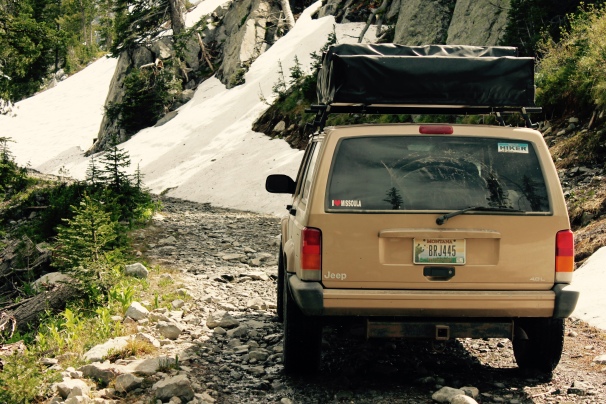 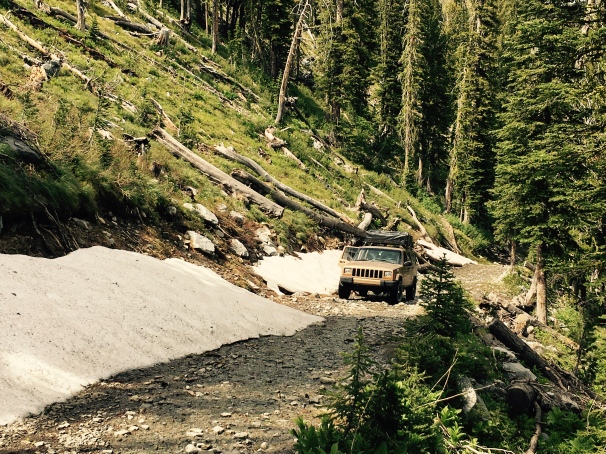 In 4-low we slowly crawled up the steep and water-logged track, weaving between snow banks and scrambling for traction on the loose rock and gravel. 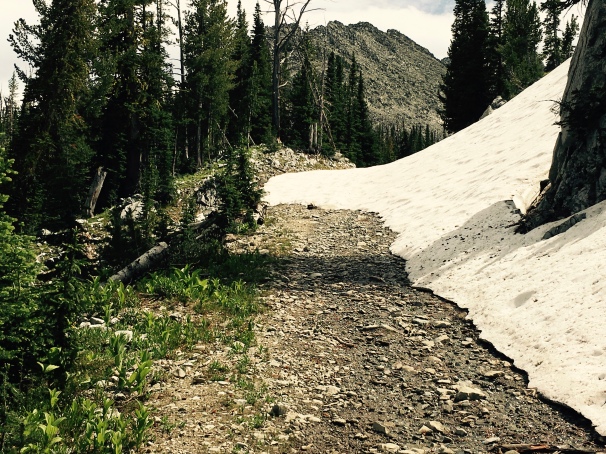 This snow bank proved even too much for the many ATVs we met on the road.

But this was the end of the road for us – about 1/2 mile short of the old mine, seven feet of consolidated snow from the previous winter blocked the path. We turned around with a plan to hike to Ajax Lake instead the next day. 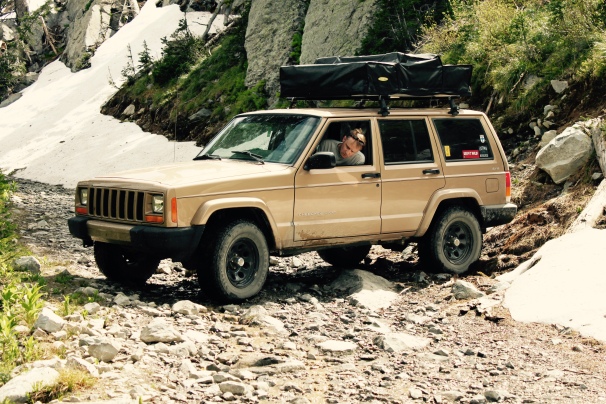 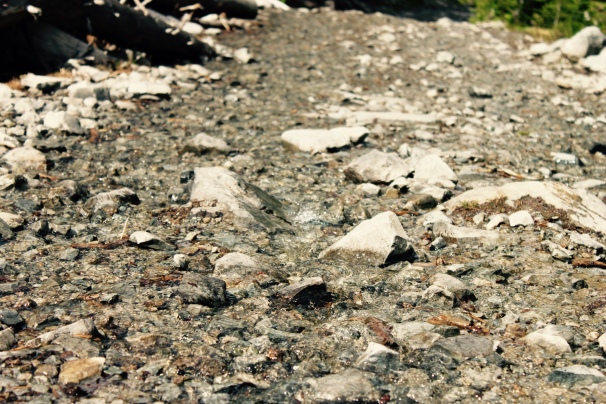 The outlet to Ajax Lake, Ajax Peak in the background. 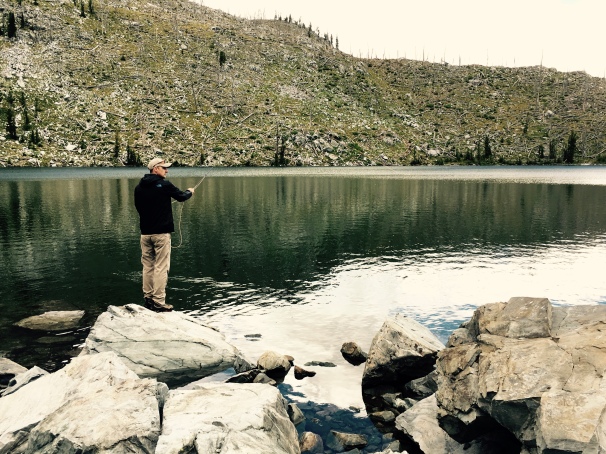 I only had a chance for a few casts in Ajax Lake before a thunderstorm sent us scrambling. 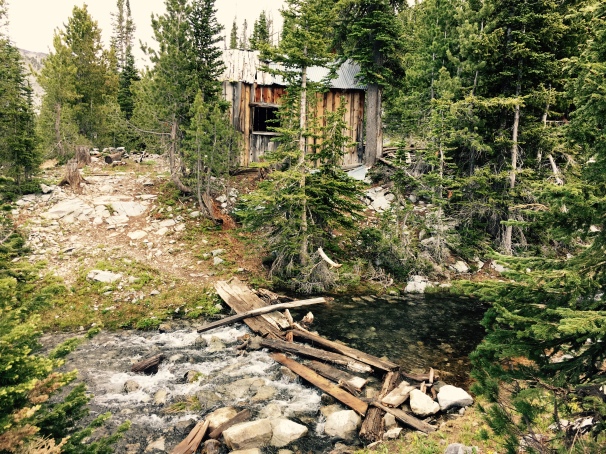 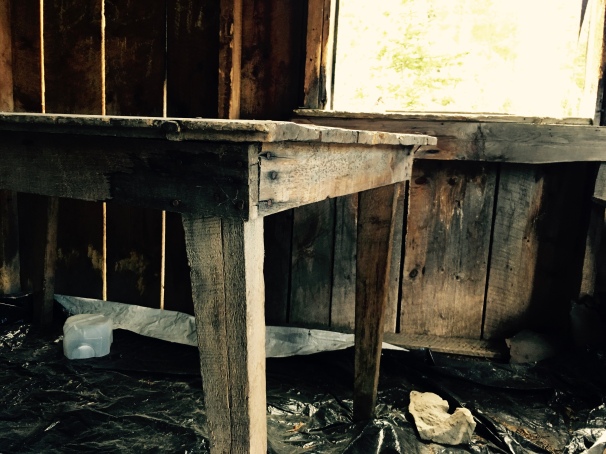 The cabin was remarkably weather-tight. 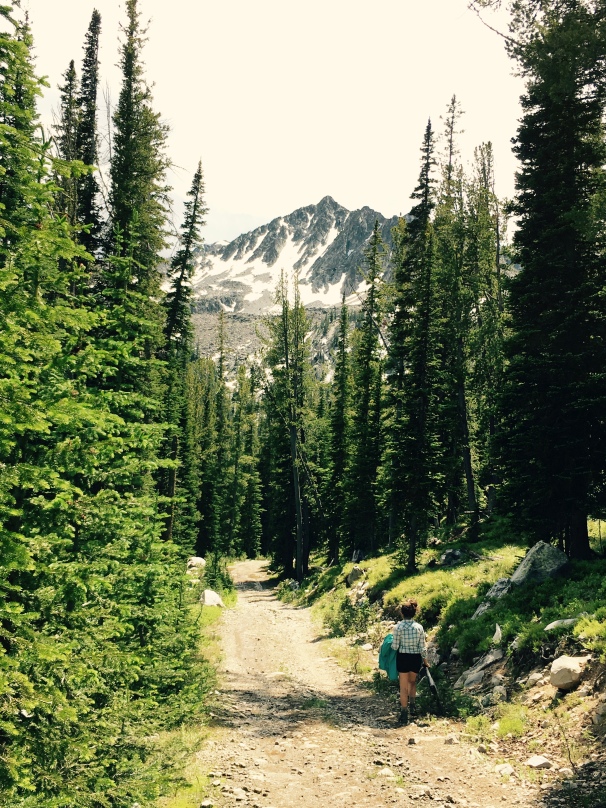 Hiking out from Ajax Lake.

We had one more night left in our long weekend, so we chose to drive down from Big Swamp Creek, back through the Big Hole valley and the tiny town of Wisdom, and west over Chief Joseph Pass into the Bitterroot Valley.

Without too much trouble, we found a USFS campground with only four widely-spaced sites on the banks of the East Fork of the Bitterroot River. We relaxed and I wetted a few lines, but struck out with the fish. 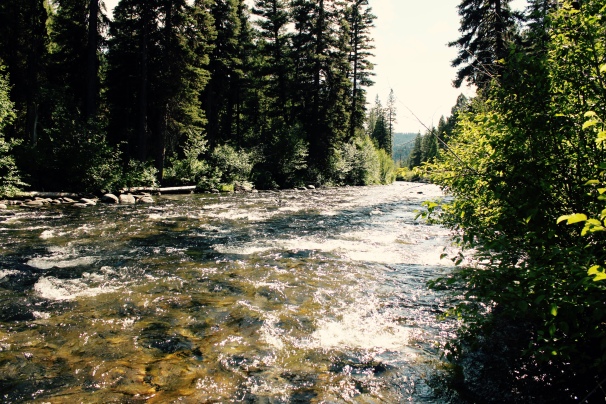 East Fork of the Bitterroot River. 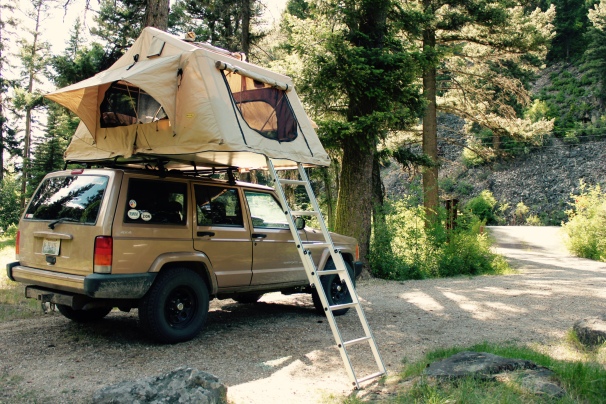 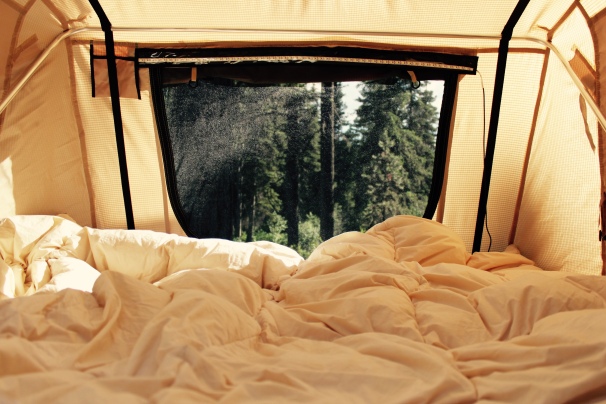 A down blanket folds into the Smittybilt RTT and takes the bite out of chilly nights. 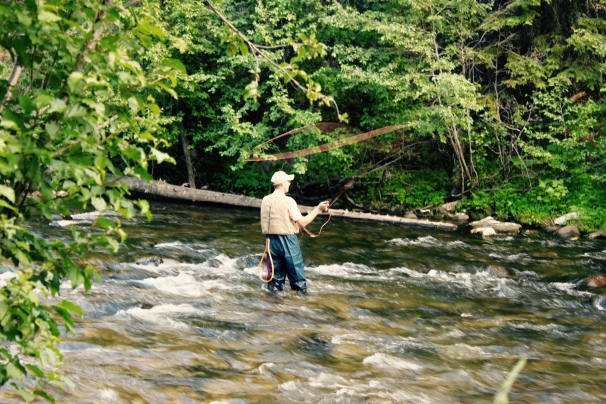 I may look the part, but I’m not a great fly fisherman – not patient enough.

Despite its location directly on the riverbank, Jennings Camp was dry enough to keep the bugs away, and just enough off the beaten-track to make it a real gem. We think this might be one of the best easily accessible USFS campgrounds in western Montana.

We’ll be back to the Beaverheads and down the East Fork again for sure, but there’s so much more to explore in this amazing state – more than enough for a lifetime.

5 comments on “The Many Mountains of Montana – Beaverhead Range”