Quick jaunt to San Francisco means a stop at City Lights, one of the all time greats. Treated myself to the new Murakami, plus this fascinating non-fiction by a Czech writer (check out the gorgeous book jacket). Oh yeah, and books, not bombs. 📚 @citylightsbooks #citylightsbookstore #bookshop #independentbookstore #books #bookstore #sanfrancisco #read #readafuckingbook #readinglife #newbooks #travel #booksnotbombs
Mood. #catsofinstagram #kittensofinstagram #kitten #cat #thejadekitten #morningmood
Some of you know that I’m a librarian. I’ve been thinking a lot, since moving back to the US, about what skills I can bring to bear on making my community and country better places to live. Since I’m trained in curating, analyzing and sharing information, I decided that what I could do is help people learn better skills and dispositions for dealing with fake/false news and media manipulation. I’m partnering with @humanitiesmontana for their Informed Citizens series and my first gig is at my own @missoulapubliclibrary talking about how fake news spreads. I’m super honored and more than a little freaked out because, 1) it’s my library and I want to do a good job for them, and 2) it’s a complicated topic with exactly zero easy answers. Anyway, it’s my way of giving back (and fighting back) using the tools and education I have. If you’re interested in me using this space over 2020 to share tips and tricks with you let me know. I’m sure I can fit those in between photos of cats and cars! 😉#fakenews #fightfakenews #librarian #librarianlife #humanitiesmontana #informedcitizens #democracy #criticalthinking #mediamanipulation #missoula #missoulapubliclibrary #think #library #loveyourlibrary
Man. I did not think @ourblackcoffee @blackcoffee.mt could make me any happier, but these gift boxes are the. best. Needed some Missoula gifts for friends out of state and this is perfect. #blackcoffeeroastingco #coffee #madeinmissoula #buylocal #missoula #theperfectgift #missoulamade #locallyowned #ilovecoffee

I mentioned in an earlier post  how much we like our neighbors. I should have made one exception. They’re all great, except for this guy: 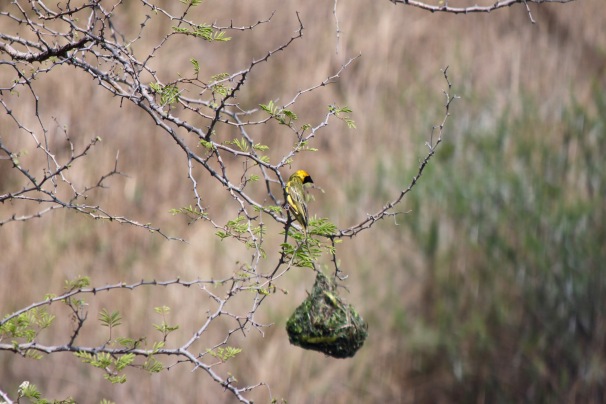 He inhabits the tree outside our bedroom window and he makes a racket every morning. In his defense, he was here before we were, but he hasn’t done much to moderate his habits now that he has new neighbors.

He’s a Village weaver, and he greets the dawn each day with open beak and wholehearted song. We haven’t paid him too much attention, given all of the other interesting birds around, but we’ve developed sort of a soft spot for him. He drives Steve absolutely mad in the early hours of the morning (they are noisy birds), but once he’s up and about, Steve enjoys watching from the patio.

Sure enough, our little yellow friend was extremely hard at work, flitting between the tall grasses and the branches of the tree, crafting a pretty little nest. I love the weaver nests here – instead of taking over entire trees, like they do in Namibia, looking like someone threw massive hay bales up into the branches, the nests in Gaborone hang like little jewels or ornaments from the trees. They’re perfect little tear-drop shapes, dangling well out on the limbs, away from monkeys, snakes, and other threats. Tightly and ingeniously woven, they look extremely cozy.

The little guy worked all day – I have no idea how he didn’t exhaust himself, (good old Wikipedia says that a typical nest is made up of 300 pieces of grass or other material) bringing back grass and leaves piece by piece and threading them together with precision. By the end of the day, the tree was decorated with a single, perfect nest. 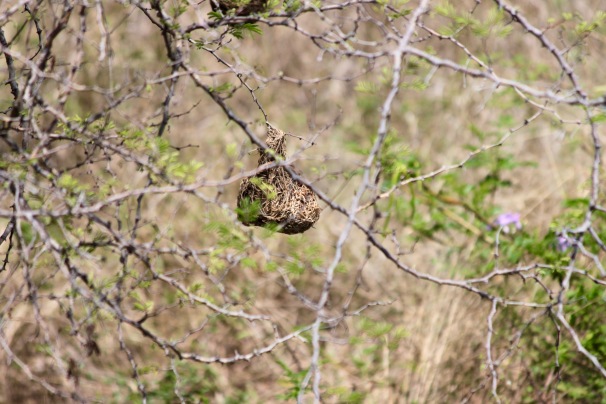 “Good for him,” Steve said.

Those good wishes vanished before dawn the next morning when our neighbor resumed his song, altered that day, with vigor and volume. Now that he had a cozy little nest, he was in search of a lady weaver.

We think that he was successful, as we eventually saw the head of a lady weaver peeking out of the nest while the yellow bird sat on the branch above. (I think he was admiring his handiwork, though I did wonder if he was thinking “wait a minute, you mean I don’t get to live in there anymore?”)

So it appears he had success, and it seems his song has resumed its normal volume, as opposed to the lusty cries for a mate we heard earlier. However, sometimes a good thing can be too much of a good thing, and Steve and I are starting to worry about the neighborhood.

It seems that our industrious friend, satisfied (or not) with his first nest, decided to build another. And then another. They’re springing up all over the tree – the work of one determined bird. He’s working on a fourth this morning and I managed to snap some photos of him in action. I’ve been working like crazy here, but he puts me to shame. I want to tell him to take the weekend off, but I don’t think he’d have it. 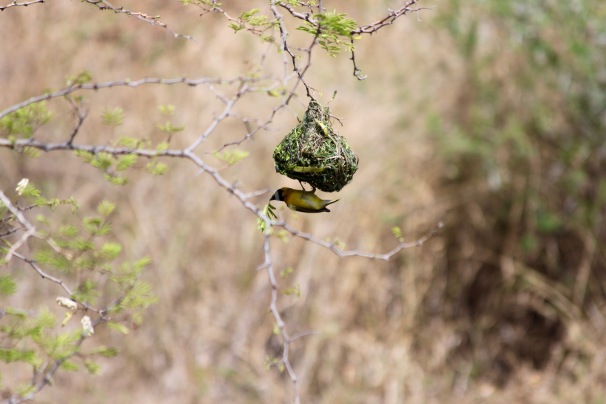 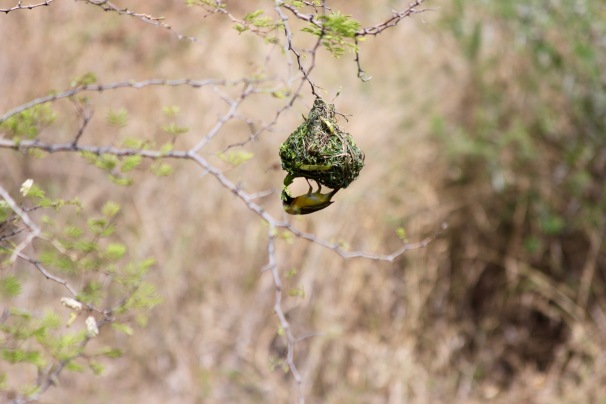 Bunching up the leaves and lining the nest. 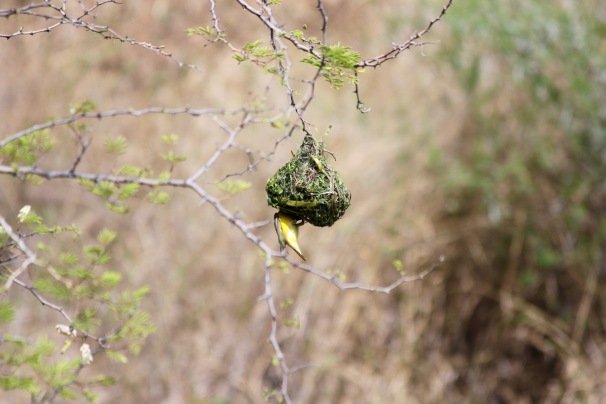 This clearly takes some skill. 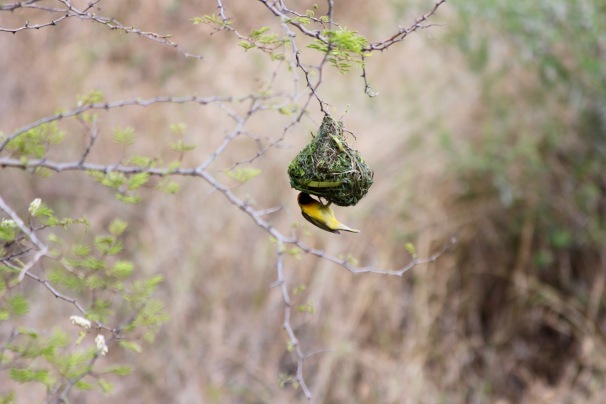 Satisfied with the nest. 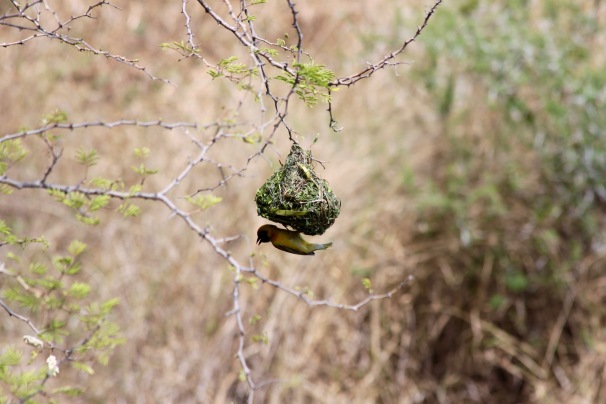 I’m fairly convinced that he wants to develop weaver condos in the trees. I have to admire his ambition, though if he manages to rent out all those nests to other weavers who start singing before the sun comes up, he might get a visit from the neighbors.

Note: My apologies to any actual birders who read this and know more about weavers than we do. I’m always looking for the story, not the science.