Sometimes you need a little juice. 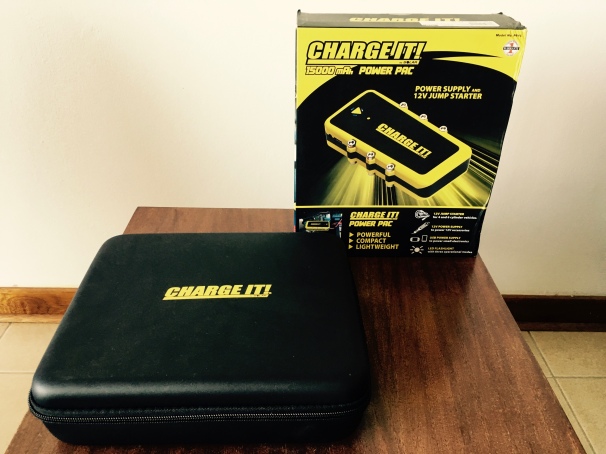 Recent advances in battery technology have made remote and extended overland journeys safer, more accessible, and more comfortable. From vibration-resistant and leak-proof gel cell lead-acid units, to sophisticated dual-battery systems that will run a portable fridge nearly indefinitely, to flexible and light-weight solar panels that can send you and your vehicle far off the grid, the market is now awash in hundreds of different products that will keep those electrons flowing on the go.

Of course, as we continue to rely more and more on the devices that consume those electrons – the phones, GPS’s, cameras, drones, laptops, lights, compressors, pumps, and fridges – the demands and draw on our electrical systems only increase. It takes a lot of juice to keep all those batteries topped up and the beers icy cold. 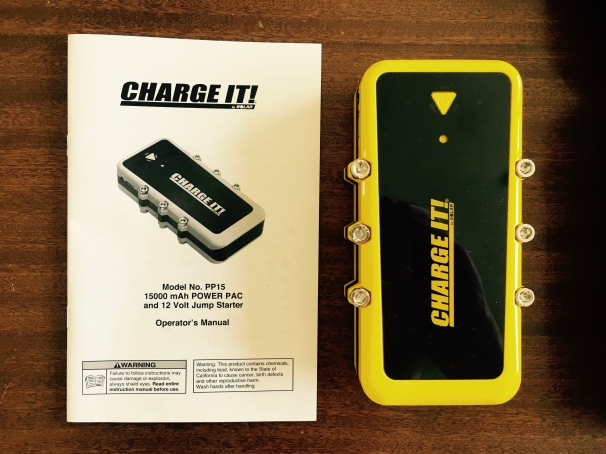 The Charge It! PP15 and user manual.

Last month, in my discussion on DIY tire repair, I linked to Jonathon Hanson’s article at Exploring Overland on the “two tool kits that will (almost) breakdown proof your vehicle”. Besides the tire repair kit, the other tool he includes is the 12 Volt Lithium battery microstarter.

When fully charged, these simple and compact devices can jump-start a dead vehicle battery in a matter of seconds, and they include handy accessory outlets for portable charging of all kinds of small electronics. There are plenty of microstarters on the market now, let’s take a look at just one of them. 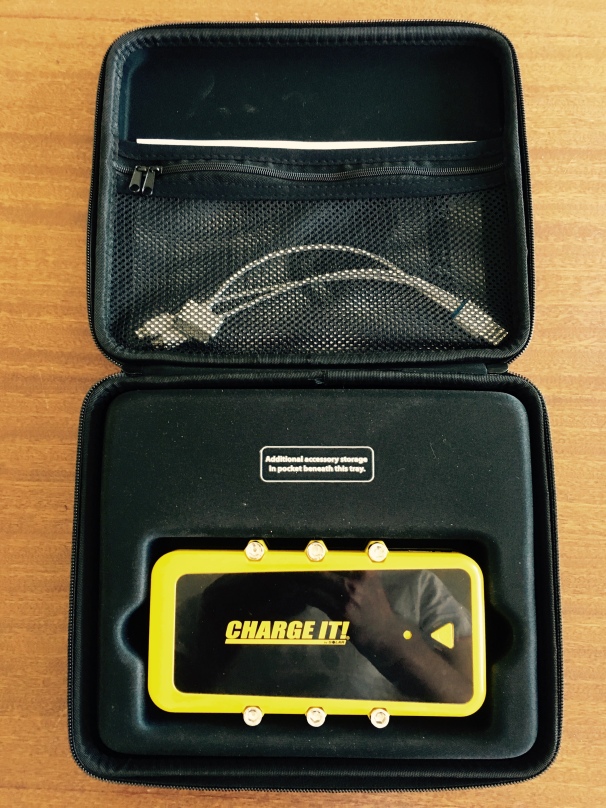 The Charge It! PP15 snug in its carry case.

Our new friend Lauren visited us in Gaborone a couple of weeks ago on her way to Maun to begin nine months of fieldwork studying human-elephant conflict in rural northern Botswana. In her checked luggage she stashed the microstarter I ordered before we had jetted off to Africa, but which had been delayed in delivery until after we left.

The Charge It! PP15 is a 15000 mAh battery pack with multiple outlet voltages, and boasting 400 Peak Amps / 270 Cranking Amps for jump starts. The manufacturer, Clore Automotive, claims that’s plenty of juice for starting most 4-cylinder and 6-cylinder vehicles. Available through Amazon, and other retail stores, I purchased my Charge It! online from Pelican Parts in Atlanta, GA where I had store credit. The PP15 is manufactured in China. 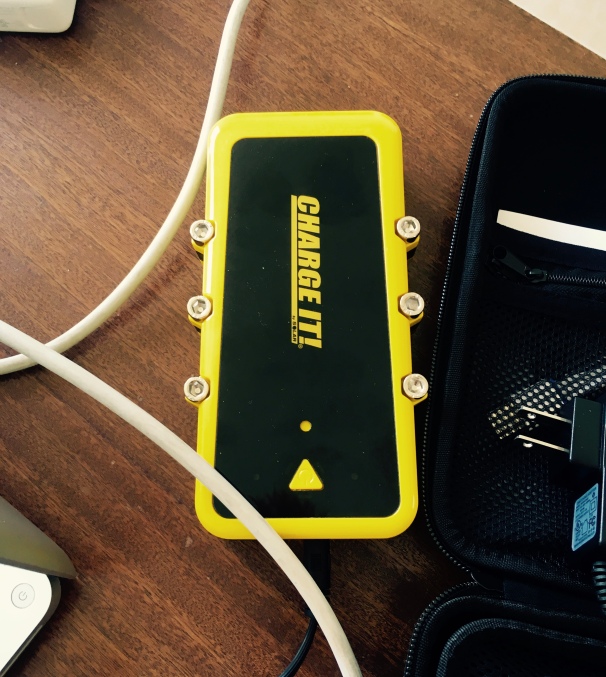 The battery itself weighs in at a little over 3 pounds, and is about the size of an especially large Lonely Planet travel guide. The safety-yellow and black color scheme ensures good visibility, and the mostly smooth polycarbonate case is broken up by trapezoidal ridges that house robust allen head bolts.

These fasteners presumably keep the unit in one piece, and I had to muster some will power to pull an allen wrench out of my sweaty fist to prevent myself from peeking inside. Maybe once the PP15 has reached the end of its service life, I’ll crack it open. 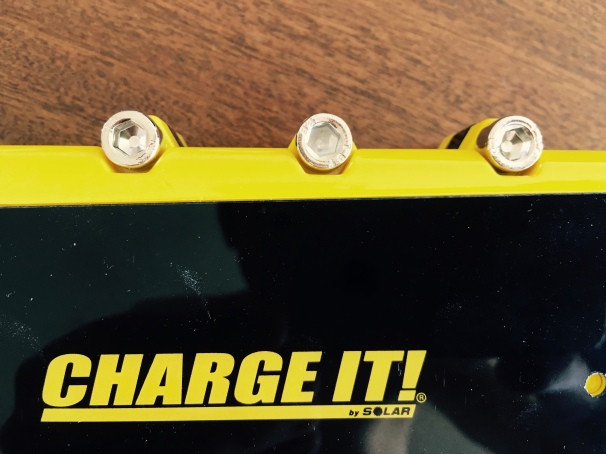 Included with the battery pack are sturdy and thickly-wired, if somewhat short, alligator-style battery clamps that plug into a dedicated “reverse polarity-proof” outlet on the end of the unit. 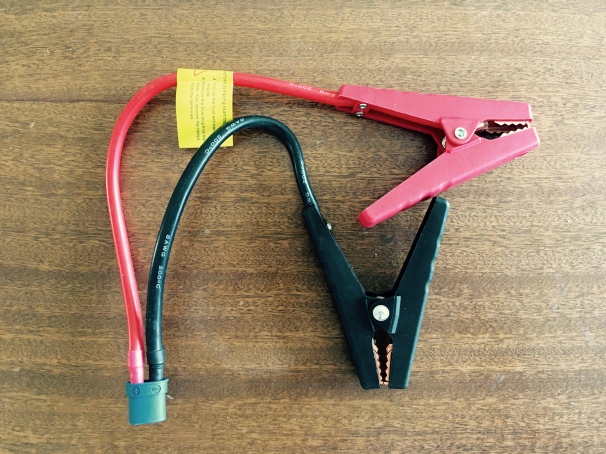 Other power outlet cables include a 12V/10A cigarette-style plug, and a Cerberus-headed USB adapter that offers outlets for 5V/2A charging: the old 30 pin Apple cable, Apple Lightning, and Micro USB. The PP15 also offers a 19V/3.5A port for charging PC laptops, but the adapters for this outlet are sold separately, and do not include connectors for MacBook. 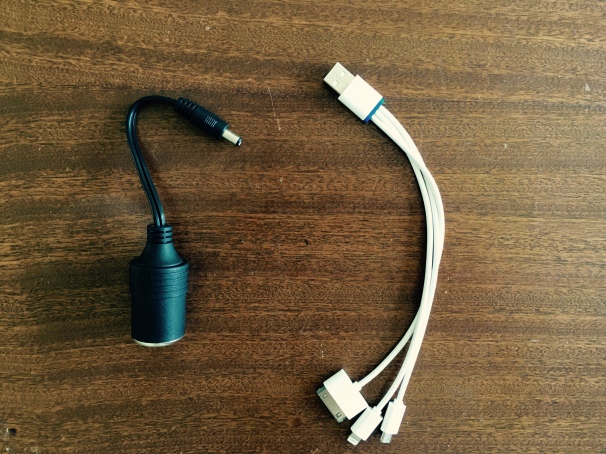 The outlet adapters included with the PP15.

Charging-wise, the PP15’s Li Ion battery can be rejuvenated via its 14V/1A input through two different options – a 12V DC cigarette adapter or a standard 110V AC wall plug. 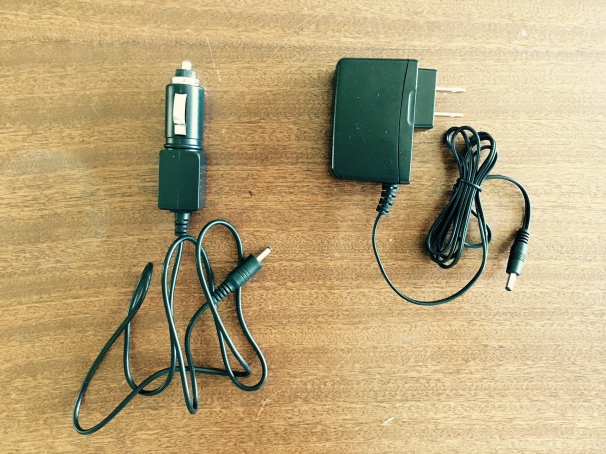 Charge the Charge It! 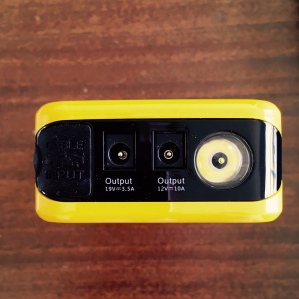 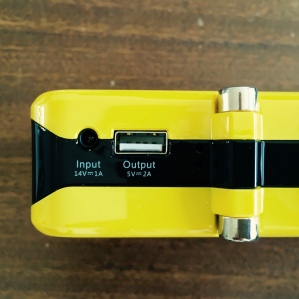 The PP15’s microprocessor includes a raft of built-in safety features that protect both the battery and your devices, including over- and under-voltage protection, short circuit and reverse polarity protection, and a low voltage override, among others.

A simple, and easy to interpret three-LED cluster around the power button keeps you up-to-date on the charge status of the unit. Three blue lights indicate a full charge, two – 60%, one – 30%, one LED flashing – time to recharge. The LEDs change behavior and color to indicate various faults and protection triggers, as well as during the jump start procedure. 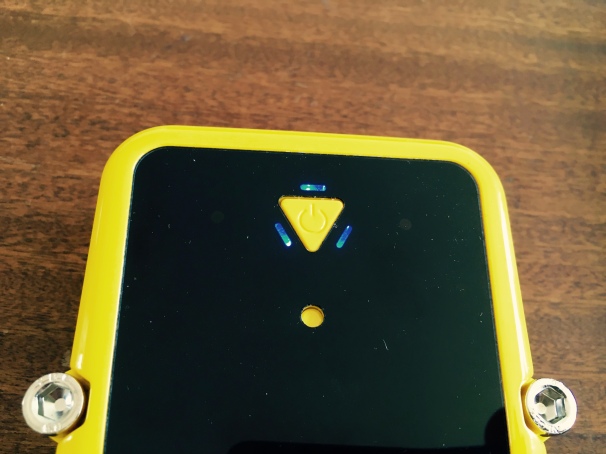 A final feature to highlight is the LED flashlight embedded in the end of the battery pack. Press and hold the power button for three seconds and the light offers three different settings: one constant light, and two different flashing states.

This sucker is bright – almost too much to look at directly – but its utility is a bit suspect given the heft and awkward shape of the battery pack. An everyday carry kind of flashlight it’s not, but in a nighttime emergency all those lumens would likely come in handy.

The PP15’s carrying case keeps the battery pack and all the accessories neatly and securely cinched down. While not exceptionally well-padded, it does feel pretty tough and fairly weatherproof with its rubber exterior coating. 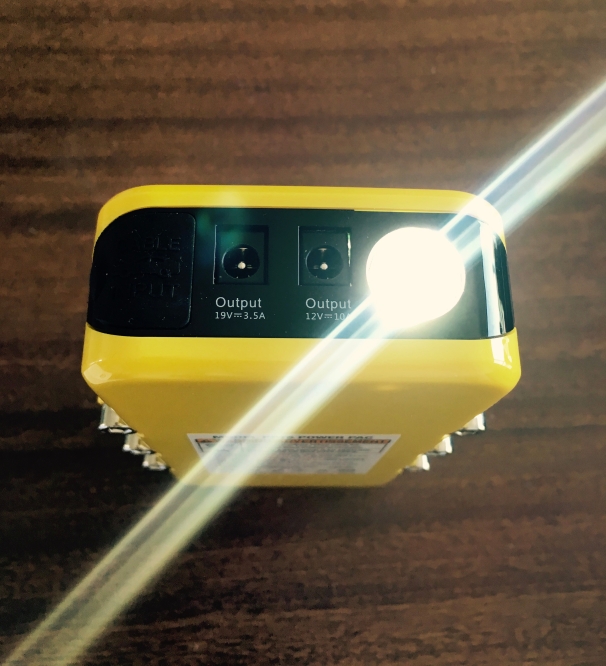 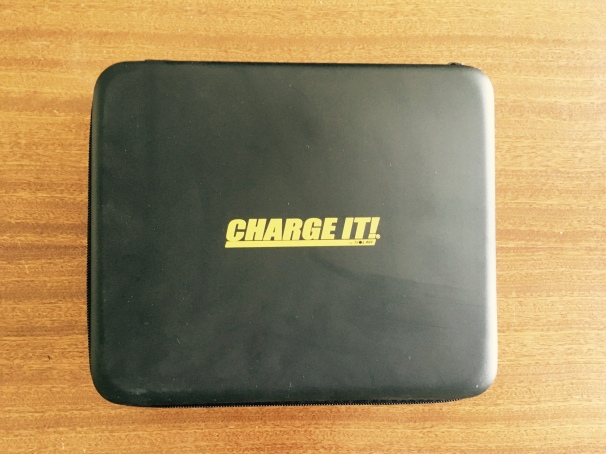 Fate has not yet furnished me with a dead vehicle battery to test the jump starting capabilities of the PP15, but a 30-hour power outage in Gaborone recently did offer the chance to put the microcharger through its paces.

With my MacBook Pro’s battery running at 8%, and the wall outlets dead, I needed some juice. Lacking an adapter designed to plug the laptop into the Charge It! directly, I snagged my 80 Watt continuous AC power inverter from the Pajero, plugged it into the PP15’s cigarette style 12V DC adapter and started charging. 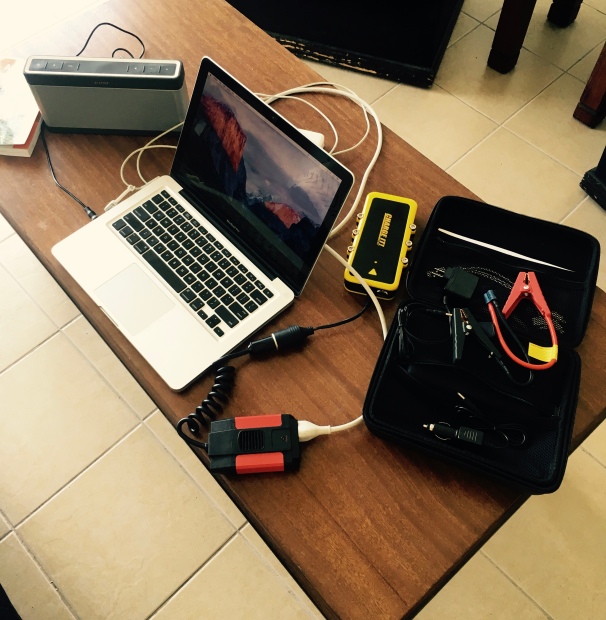 Starting with 100% capacity in the PP15, running the inverter and charging the Mac’s battery while I continued to work on various projects, the Charge It! managed to bump the computer’s charge up to 68% in 45 minutes before finally conking out.

That’s not bad given the simultaneous heavy draw of the power inverter and the Mac at the same time. It ran almost completely cool during the entire operation. Once the power came back on, the PP15 recharged fully from empty via the 110V AC wall plug in a little over two hours.

Multi-tasking tools like this microcharger are the kinds of devices that should be in every overlander or remote traveler’s quiver.

It can save your bacon in an emergency by jump starting a dead battery without the help of a second vehicle (and, by turns, potentially save the actual bacon sitting in your portable fridge). But it can also keep you connected and entertained by charging your small devices, which are the kind of simple, yet pleasant conveniences that make travel more fun.

As we use the PP15 more over the next year or so, I’ll continue to review its performance right here on mtdrift.