Beasts of Botswana – The Greater Kudu

Two years ago, we were camping in the Kalarahi and saw a kudu for the first time. It went like this:

“We spent an hour fascinated by a kudu approaching the water at Motopi. Emerging from the brush in the distance, he made his way slowly and circumspectly, watching the truck carefully, stopping to stare and make a wide circle around the water. He was magnificent – massive, soft grey, with white stripes down his sides and a white mask. His horns were dual spirals a metre long. He looked, as Steve said, as if he’d just wandered out of a prehistoric cave painting. He would bend towards the water, balk, and step away. He repeated this three or four times before finally stepping wholly into the water and bending his nose to drink. Immediately, his harem approached and went without hesitation to join him.”

They’re still our favorite big antelope (tied with the gemsbok). After months in Botswana we never, ever get tired of seeing them. Unlike the ubiquitous impalas, who elicit little more than a glance and shrug these days, we stop to stare at the kudus – every time. There is a pair of brothers, so we think, who hang out at Mokolodi and who were among the first animals we saw when we went back out there after two years away. We’re thrilled every time we see them.

The males are particularly spectacular. Their horns really are a meter long (excuse the British spelling above, used for a magazine in South Africa). They are massive, massive animals – the closest thing I can compare them to are the moose back home. But they are far more handsome than a mere moose. They are strikingly beautiful and fun to watch. I think that their faces are quite expressive, as antelope go, and when we’re feeling cheeky we call them the hipsters of wildlife, on account of their fabulous neck beards. Joking aside though, watching a kudu pick his way through the tangle of trees and brush, backlit by the sun, is one of the things I love most about our nature drives here. 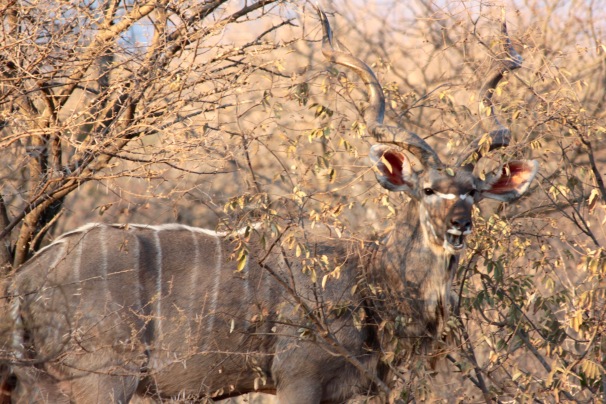 Around Botswana, we see the Greater Kudu. Our Audubon guide describes them as “a very tall, narrow-bodied antelope with a small head and huge cupped ears. . .horns, in male only, have up to 2 full turns: 3’4” – 4’8”.”

Lonely Planet’s Watching Wildlife Guide: Southern Africa adds this wonderful tidbit about male competition for mates: “in the ‘lateral presentation’ contest, two rivals walk stiffly opposite each other with manes and crests raised, showing off their potency. A flattened body profile and striking white markings enhance the show, and although differences between the competing males are typically too subtle for human onlookers to pick out, males usually resolve their differences without combat.”

So, without further ado, enjoy the kudus: 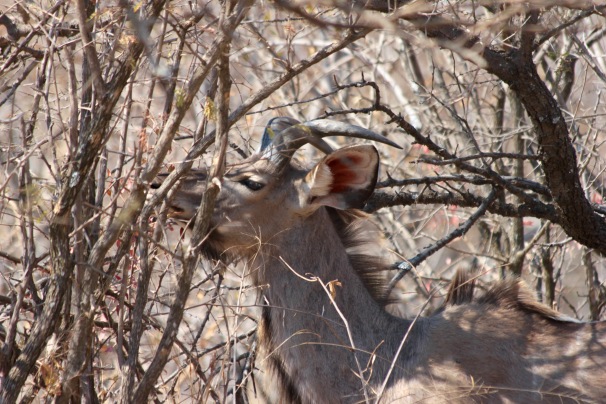 2 comments on “Beasts of Botswana – The Greater Kudu”