"The land of extreme thirst" - our first stop in a circuit of southern Africa.

Graham is a solidly-built farmer from the Northern Cape of South Africa – well-fed I’m sure on boerwors and countless braais, toughened by pulling calves from his herd of 500 cattle, and twisting fence in the austral sun. His son is a shy 10 year-old, lanky and knock-kneed, kicking the sand with feet clad in brown saddle shoes and white socks. He doesn’t say much, but he looks me in the eye, his face recently marred by a broken nose (Schoolyard fight? Kicking horse? No one explains.), and grasps my hand with a firm shake.

The three of us are standing in the shade of a Shepherd’s Tree between our respective studio-style bungalows at the Kgalagadi Lodge on the outskirts of the Kgalagadi Transfrontier Park (TFP) in South Africa. It’s Christmas Day.

Graham and his family are packing hastily for their regular holiday excursion to the TFP (leave it to a farmer who spends all his days outside to take a vacation… outside). He’s happy to talk with the American next door – perhaps too much so for his wife and older son who are busy cramming luggage into their bakkie. Graham spent some time in the US working in South Dakota and Iowa, and he reminisces fondly about fireflies, rolling green farmlands, and big Ford pickups.

We chat about South African politics and his ambition to move his cattle operation north to Botswana. Conversation turns naturally to the National Park at our doorstep. On Christmas Eve, Julie and I had wrapped up five surprising, heart-stopping, tire-churning days in the Transfrontier Park, and we were still trying to make sense of it all.

Graham filled me on the details of the history of the Park, which is a remarkable conservation landscape shared jointly, but administered separately by Botswana and South Africa – the two halves could not be more different.

The Kgalagadi Transfrontier Park was formed in May of 2000 in a bi-lateral agreement between Botswana and South Africa, but the land has been in conservation status since 1931, making the region one of the oldest protected wildernesses in Africa.

We started our journey across the Transfrontier Park on the Botswana side, in Kalahari Gemsbok National Park. Occupying over 11,000 square miles in the far southwestern corner of the country, Botswana’s section of the TFP is some of the most remote and isolated terrain you can travel to in all of southern Africa. Me being me, when I visited the Botswana Wildlife and National Parks office in Gaborone to make our reservations, I chose the most remote and isolated campsite in the whole place.

The Swartpan campsites are located near the far western boundary of the Kaa section of the Park, only a few kilometers from the Namibian border, but many hundreds of kilometers away from everything else. This bears mentioning, because, as per usual for us, we were running late. 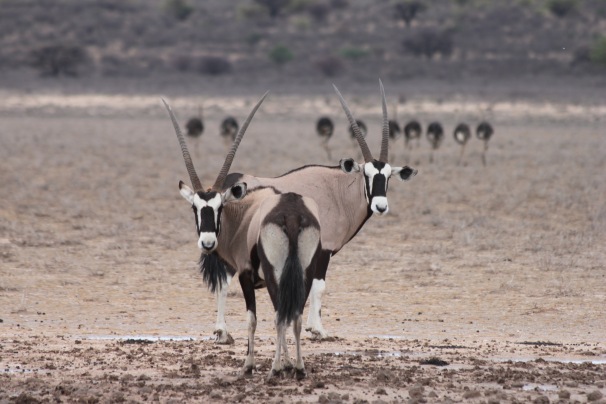 A slow start out of Gaborone meant our first travel day ended for an overnight stay in the mining town of Jwaneng, about 200km short of where we had intended. A cardinal rule of travel in rural Africa is leave more time than you think you need, and we were already on the wrong side of the curve.

Up at dawn the next day, we drove in circles around the village of Hukuntsi at the end of the paved road, followed outdated directions from the GPS after I begrudgingly turned it on, and finally found the right gravel road that would bring us to the Kaa entrance of TFP.

(Who are you going to trust? Your stellar instincts and a trusty paper map, or some stupid satellite? Hold that answer for now, we will return to it later.)

The wide and fast way ended abruptly at the salt-harvesting village of Zutshwa. The citizens of this community have set aside much of their traditional grazing land as a locally administered wildlife and nature reserve. We paid a nominal fee to the earnest young man with gold caps who ran through town after our Land Cruiser to meet us at the gate and give us our permit. 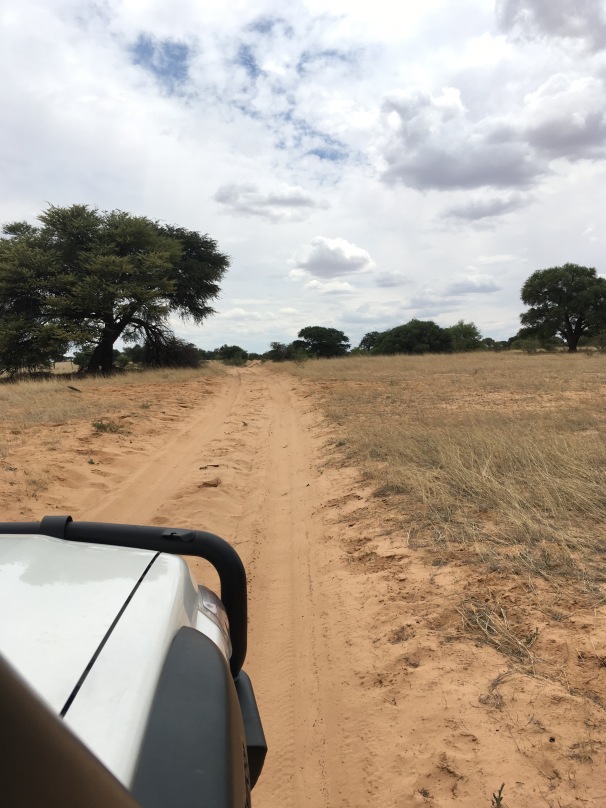 Quite a few of Botswana’s rural districts are following this model, and we were happy to pay a few Pula to help maintain more wildlife habitat. The unfortunately named KD2 Conservation Area Reserve stretches across some classic Kalahari veld – that Goldilocks, just-right landscape that’s not too bushy, and not too barren. Well-spaced acacias and camelthorn trees offer shade for the wildebeests on grassy plains, and gemsbok trot across the small pans. It’s idyllic, and would be worth an overnight stop at one of the handful of isolated campsites. 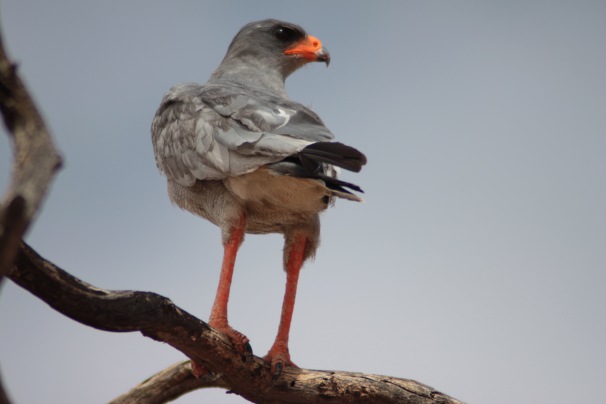 Gaspard’s Goshawk, one of my favorite birds of the southern African veld.

But we were on a mission, and behind schedule. The sandy two-track in KD2 was slower than we imagined, requiring low range in a few places, and we only made the National Park entrance by 3:30. We still had almost 70 km of unknown, but likely very rough and sandy terrain to traverse before we reached our first campsite before dark.

Little did we know, we would also be racing the weather. December is the “rainy season” in Botswana, and we were in for a taste. The road to Swartpan was indeed a challenge – deep, loose Kalahari sands whose lack of tire tracks indicated that it hadn’t been driven in days.

We were not entirely alone. The wind-scoured trail was littered with spoor from animals of all kinds, including some very large (and very small) lions. The TFP is famous for its population of black-maned lions, and to be honest, after not seeing a single big cat during our last trip to Africa, we were holding our breath a little bit.

After an exhausting twelve hours behind the wheel, we finally skidded to a stop at the first campsite on our three week journey. But there was no time to relax. Ominous clouds had been amassing on the horizon for the previous two hours, like a huge, dark herd of wildebeests bearing down on us.

Rounds of thunderclaps rolled in from the distance, and having experienced some of the intensity of Kalahari storms back home in Gaborone, we dove right in to setting up camp, wrestling with the tent’s rain fly in the gusty winds, and quickly cramming snacks into our faces.

Hustling to pitch the roof tent.

Our home for the next three weeks.

And none too soon, as the first giant splatters of rain came crashing across the pans I helped Julie with her broken ankle up the ladder, and we zipped ourselves into the welcoming shelter of the Land Cruiser’s roof top tent. We wouldn’t leave its canvas comforts for twelve hours.

All night long, a steady line of storms pummeled the Swartpan campsite as some of the loudest thunder I’ve ever heard shook the big Toyota, and the winds rattled the tent stays. The rain would collect in deep puddles on the awnings, and then suddenly overwhelm the fabric and crash to the ground with a satisfying, “SWOOOSSHHHH”. We were warm and dry, and we couldn’t have been happier. There’s something particularly exciting about riding out a storm in a tent, especially on your first night out on a big adventure. The rains didn’t let up until nearly 7:00am the next morning. 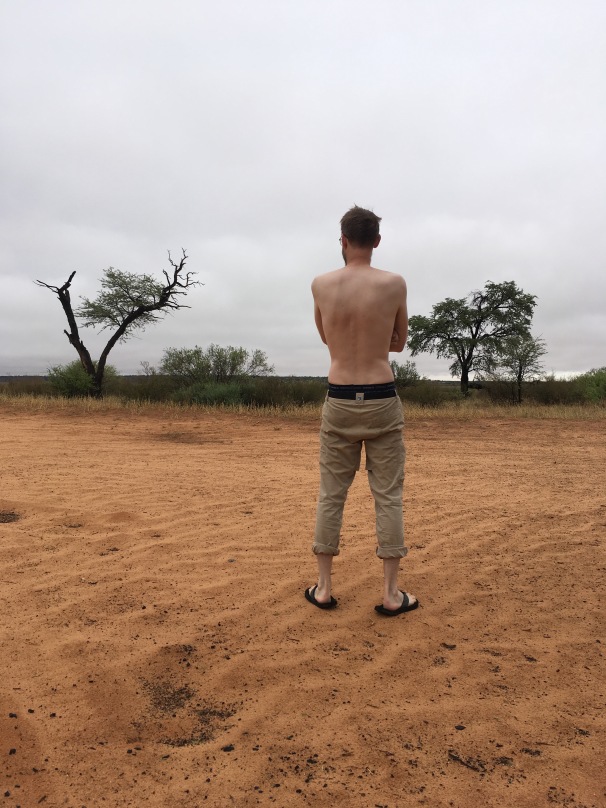 The start of day three, and I’m already going a little bit feral.

Wet Cruiser the next morning.

Rain collected on the pans, making for some interesting driving. Swartpan, Kgalagadi TFP

Cool temps, grey skies, and storms remained with us for all of our stay in the Kaa Region.

Over the next two days we simply drove slowly around the Park, absorbing the silence, isolation, and solitude. The wildlife remained mostly hidden, but so did the people – we felt like we had 11,000 square miles all to ourselves. Truthfully, I could have stayed a few more nights. 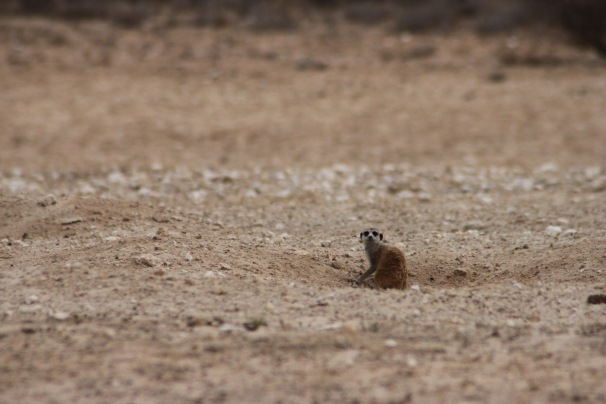 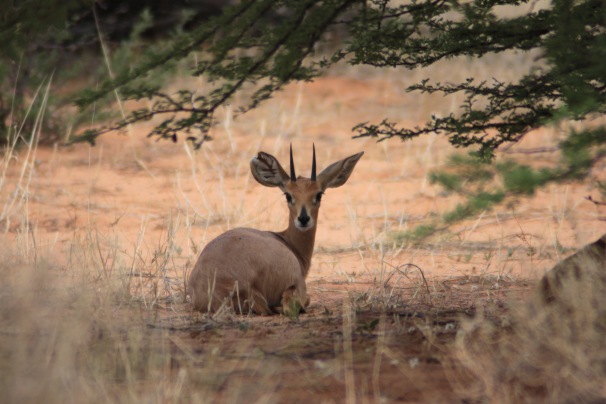 But the South African side of the Transfrontier Park was calling, and there were quite a few kilometers of Kalahari dunes between us and our campsite across the border at the Nossob Rest Camp.

As it turned out, there would be far more kilometers than we had planned for.

Close up of the Park’s eponymous beast of the plains, Kalahari Gemsbok National Park