“Ma’am,” some of my students approach me after class. “You know we’re working as librarians.”

This was during my first semester here, when I was teaching Information and Society. These particular students were telling me that they had already been working in public and community libraries in Botswana for a number of years. Here, you can study librarianship at several levels – certificate, which is about a year of study; diploma, which is two years, roughly equivalent to our associate’s degree in the US; degree, which is a four-year program; and post-graduate work. Unlike in the US, where you have to have an MLIS to be qualified as a professional librarian, these various levels of study allow students to work in information management at multiple levels.

These students were older than the rest – closer to my own age. One, in particular, caught my interest with her careful attention and insightful questions. She did well in class and, after the semester was over, she became one of those students who is destined to be a lifelong friend. She and I both share a passion for community libraries and community-centered librarianship. The whole (original) basis of my Fulbright work here, community-centered librarianship focuses on what libraries can do in, for, and with their communities. The emphasis is on getting librarians out of the library and into the community, on aligning the library with community initiatives, and on aligning the library with sustainable development.

Mpho (not her real name, but it means gift and seems appropriate, as her friendship has been a gift and she has certainly brought her own gifts to bear on her library) asked me one day, after class “how – how can libraries transform their communities?” I can’t remember the details of our conversation but, turns out, she needn’t have asked. She’s already doing it.

Mpho worked for years as a library assistant in Nata, a small village in Northeast Botswana, up by the Makgadikgadi pans. She was recently sponsored to come back to UB for her diploma and she was all in – studying hard, asking questions, never missing a class, soaking up everything. I could see her turning over every topic, every piece of theory and every bit of new knowledge, and thinking about how to apply it back in the village. She is keenly interested in the application of ideas into practice – a true community-centered librarian. She’s also a natural librarian – someone devoted to this work with her whole heart.

After semester ended, Mpho and I talked nearly every week, and that is where I learned 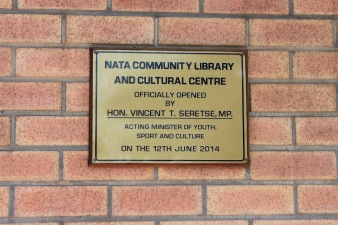 about the Nata Community Library. Nata’s library, opened in 2014, is part of a network of community libraries founded by the Robert and Sara Rothschild Family Foundation. Community libraries function in remote and small villages. They aren’t as large as public libraries and aren’t as small as village reading rooms. They occupy what I think of as that Goldilocks space in the middle – a just-right place for the community with books, programs, and wifi.

The Rothschilds, it seems, fell in love with Botswana as Steve and I did and decided to help support the development of the country in the form of these community libraries. Their work here speaks not only to their own philanthropy but also to the efforts that Batswana have made to provide access to education and information to all. The Rothschilds have contributed significantly to these efforts in the best way possible – by building libraries with and for remote communities. Working with the elders and kgosi (chief) in communities, and with the Botswana National Library Services, the Rothschilds have as their goal the opening of 20 libraries across the country. They have taken an active interest in these libraries, coming to Botswana to open them, visiting them when they are back in the country, and making sure that the ethic of community programming plays the primary role in service delivery. By Mpho’s account, they are beloved and respected partners in the villages.

The more Mpho told me about the Nata library, the more I wanted to visit. I was particularly intrigued with a program she developed in which old women in the village come together in the library space to weave baskets and learn to knit. They sell their goods in the community and to tourists who pass through Nata on the way to Maun and Kasane. Mpho, through the library, brought these women together and managed to create what I consider a true asset-based community development program: she took something good already in the community (women who are skilled weavers), matched it with a strong community institution (the library), and managed to create a community program that provides sisterhood, skills-building, development for women, and income-generation for these women’s families – bolstering the reputation of the library and Nata at the same time.

So, to Nata we went. And it was love at first site. 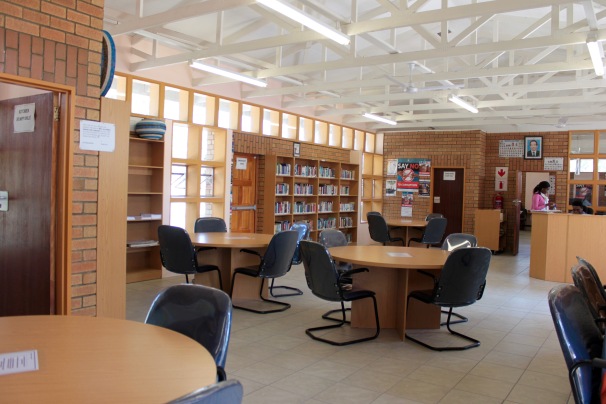 There were people in the library, but as a librarian I take privacy seriously and didn’t get them in any photos.

The library was. . .a library. A perfect, sunny, warm and welcoming place. I recognized it as soon as I walked in the door, reminiscent as it is of all of the public libraries I’ve worked in. I’m unapologetically romantic about libraries and this one made my heart sing. It is an incredible feeling to walk into a building on the other side of the world, in one of the smallest places I’ve ever been, and feel immediately at home. I’ve long thought of libraries as secular churches, and I got the same feeling walking into Nata library as I get walking into Catholic churches, wherever they are. “Oh, I know this place. I recognize this.”

The library is a wide, sunlit, open room lined with shelves. There are computers, a kitchen, a circulation and reference desk, and a room off to the right where the library conducts technology classes and opens for the community to use for meetings. It is situated right next to the kgotla, the community gathering place, where Steve and I stopped to formally greet the chief and tell him how, for us, this library put Nata on our map.

In the library, we were welcomed warmly by Tumisang (also not her real name) and introduced to the old women who were there to show us their baskets.

And let me say here that It. Was. The. Best.

I love libraries. I love old ladies. I love women working together and supporting each other. Our morning in Nata combined it all. These women, about 15 of them, some with their grandchildren strapped to their backs, welcomed us. They seemed ancient, though hale and strong.

They’ve formed a collective, complete with traditional uniforms, and they meet in the library four days a week to weave and knit. Their work is incredible. The baskets in particular are extraordinary, and several of them have entered and won regional competitions since forming the collective. Nata is dotted with palm trees and they use the palm fronds to design intricately woven baskets by hand. They learn from each other and support each other, sharing skills, passing children from woman to woman, socializing and creating an income for their families. 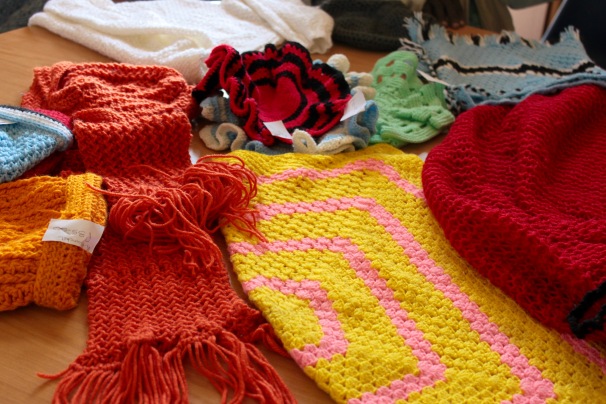 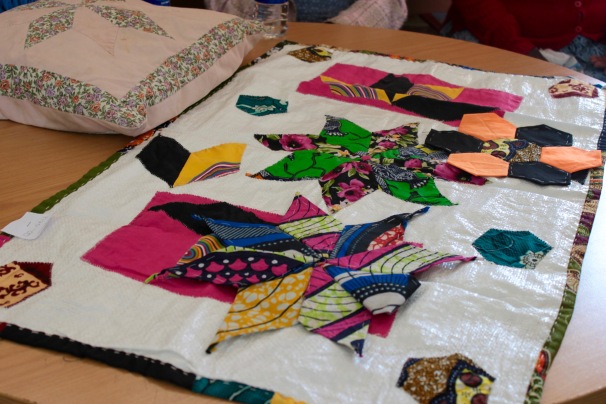 “What does this group mean to you?” I asked them.

Through Tumisang and their group leader, also fluent in English, they spoke eagerly and honestly.

“For me, I am happy because I can buy groceries and other things to support my family.”

“I like feeling like I am working and contributing and not sitting idle. It is better this way.”

“Even when I show up and there are no other women here, I weave. Sometimes, others see me and they join in and we keep going in this way.”

One particularly old woman, so small that I towered over her (I have never towered over anyone older than 10 years), sat to my right like a mischievous elf. Her hands were crossed in her lap and her feet, dangling well off the floor, swung back and forth.

“What I like best is when we travel,” she said with evident glee. Even without understanding any of her Setswana, I could tell that what she was saying delighted her. “Sometimes we get in a combi and go to competitions and we see the pans and have adventures!”

Oh, nkuku (grandmother). You have my heart. 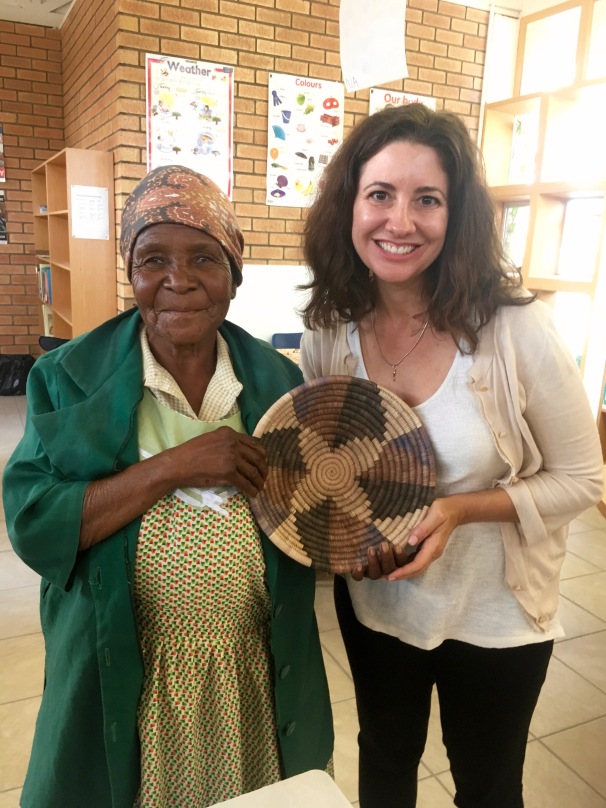 Mma Thuthuma – not too old for adventures! I told her I want to be like her when I’m old and she laughed a long time and gave me the typical Botswana low-five hand slap.

I asked what the library means to them.

“This place gives us somewhere to go and be together.”

“The library is good.”

One was adamant. “I want it to be even bigger,” she said, tapping the table in front of her with her index finger for emphasis. “I want it to have to two floors like the library in Francistown!”

“Ah, old woman,” her translator retorted. “Will you be climbing the stairs?” To which the entire room erupted in laughter.

Mma Moses and her beautiful basket.

Mma Rich, with a sculpture she made. She designed it out of hundreds of stalks of grass. It symbolizes, she told us, how all of the women are individuals, but they share the same heart. 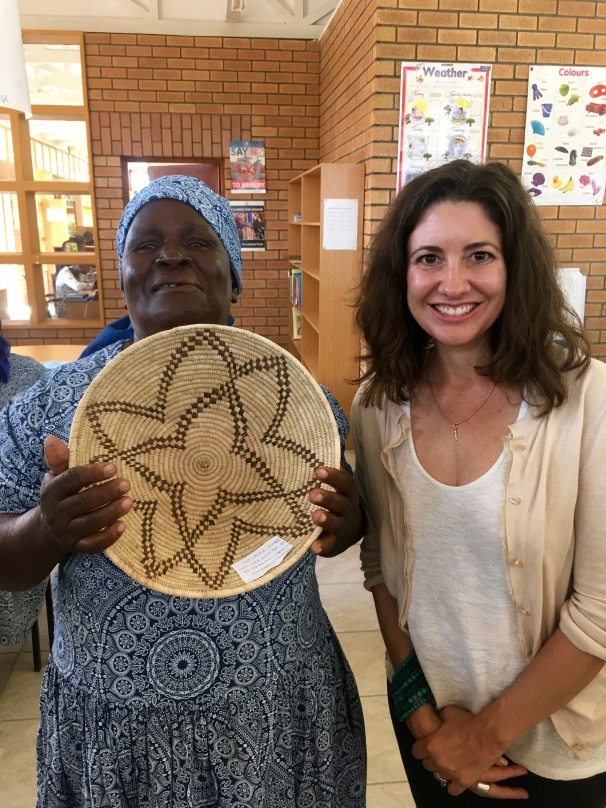 Mma Tatholo and her beautiful basket. 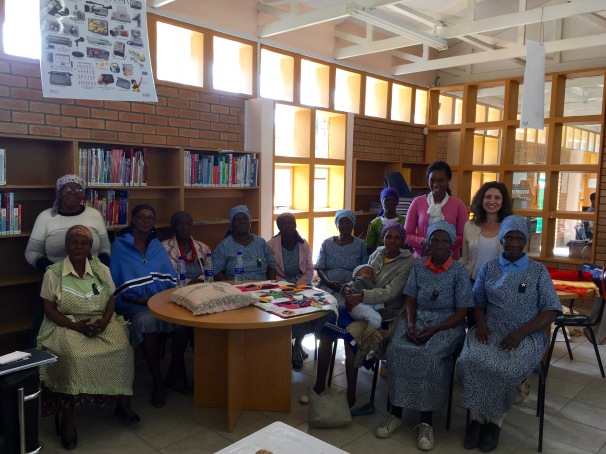 The Nata Library Women’s Collective. If anyone wants a basket from them send some money to Steve’s PayPal (email him for the deets) and we’ll hook you up. You’ll be supporting these women, the library, and the community.

We spent a long time talking about their triumphs, goals, and challenges. We admired and bought baskets, and joined them for tea. The only awkward moment was over who would get tea first. They insisted that, as guests, Steve and I eat and drink first. We, grandchildren of our own beloved grandmothers, were appalled at the idea that we would do anything ahead of these old women. They won out, in the end.

The bomma, getting tea.

It was one of the best mornings I spent in Botswana. This library is doing it – Mpho is doing it. Her programs are transforming that community, in the form of these old women. Nata should be a model for the rest of the country – and for any library anywhere interested in community-centered work. In addition to the women’s collective they have a community garden, teach ICT skills, and design other programs in an ingenious way – they invite people to the library and ask them directly what they want to do. Then, they do it. They listen and learn what people want, in which direction they want to grow, and then the library helps make it happen.

Posters around the library. 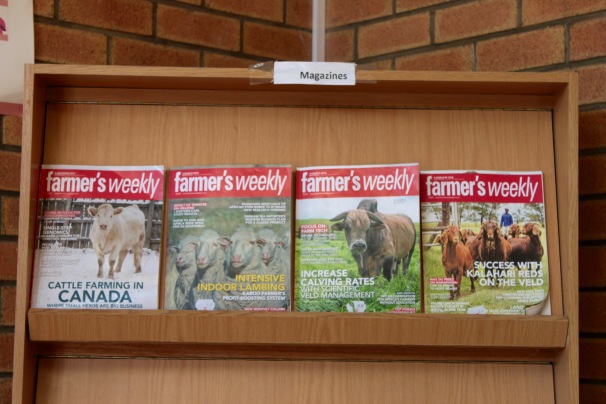 Good libraries understand their communities and provide materials that support their informational, educational, and cultural needs.

I joke with Mpho that she could have written the book that got me to Botswana, but it is no joke. She is doing true asset-based community development work through libraries. It was an honor for me to visit Nata. I plan on going back. Should we get visitors in Botswana, they will make the 8-hour trek with us to Nata to buy baskets and meet these bomma (women). They will see what the community built. They will see what Mpho is building. And they will see what libraries can do in communities.