When we visited Nata Library, Steve and I decided to forego the fancy lodges and hotels in the area and sleep in the truck. As always, we wanted to see what we could see. Plus, we like sleeping in the truck. And for a $6 UDS entrance fee and an $11 USD campsite reservation, it couldn’t be beat. We camped the night before our visit at the Nata Bird Sanctuary.

According to their website: “the Nata Sanctuary is part of the Makgadikgadi Pans Important Bird Area (IBA), and as such is one of Botswana’s premier birding destinations. After good rains, hundreds of thousands of globally threatened Lesser Flamingos, along with Greater Flamingos, Chestnut-banded Plovers, Great White and Pink-backed Pelicans, and a host of other water birds converge on the nutrient-rich waters of the pans. As the pan dries out, the Sanctuary hosts the largest congregation of Lesser Flamingos in Southern Africa – a flamboyant spectacle and a must for any bird enthusiast.”

I don’t think that Steve and I would have considered ourselves bird enthusiasts before moving here. We have both always liked birds a lot, but we certainly weren’t birders. Since coming here, though, the sheer number and variety of awesome birds has captured our imaginations.

We were greeted by the standard, cheerfully painted, stone visitor’s center, staffed with pleasant and capable staff. They told us we “might” see “some birds” – I expect that they’re very accustomed to having to manage people’s expectations. But Steve and I are happy with every new thing we see. Disappointment in the natural world just isn’t our thing. 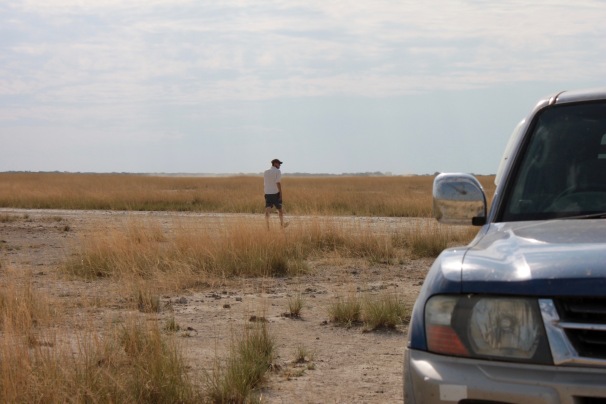 Turns out we missed the major migrations, though the pans were still plenty full of water. We ate lunch at the platform lookout, balanced between the sweeping grass and the water, displacing two pied crows who were none too happy to leave their perch and who, from the safety of the shoreline, gurgled at us throughout the meal. It didn’t sound like they were chastising us but rather negotiating in their most reasonable voices for some scraps.

Afternoon drives brought a variety of birds – storks, herons, egrets, ducks, bustards, and geese. Though there were no great flocks of flamingos, we tallied several new species: a Great egret, Cape shovelers and Cape teals, Great white pelicans, and an absolutely magnificent osprey, which our bird book claims is a very good sighting. 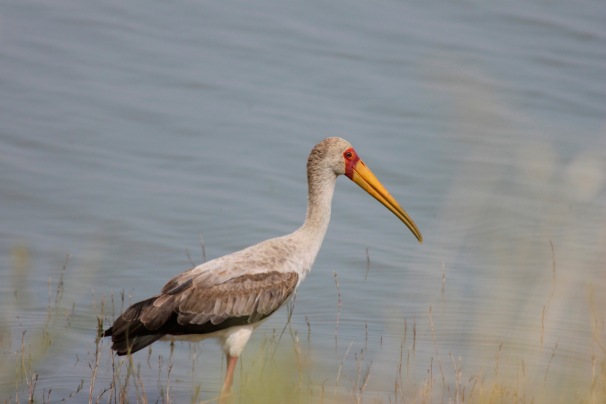 We set up camp under a glorious baobab and took advantage of the showers. One of my great discoveries here is just how wonderful a shower – any shower – is after sleeping in the truck for a few days. They are all almost uniformly ancient, surrounded by cracked tile, open to thatched roofs, and housing any number of very large spiders. But wow – are they luxuries. Considering that both the hot water and water pressure in our flat are

often non-existent, these camp showers are easily some of the best I’ve had in a year. I try mightily not to waste water, but feeling scalding, powerful jets of water washing away days of campdirt and grime, looking up to see the thatching above me, knowing that I’ll dry off to a supper eaten by a campfire, causes me to linger, creating some of my most magic moments in Botswana. It is in the camp showers when I often stop to think, “I can’t believe this. I am in Africa.”

We ate macaroni with the absolute worst sauce I have ever tasted (which did nothing to detract from the amazing shower and meal ritual) and sat by the campfire before climbing into bed. The barometric pressure dropped sometime right before we went to sleep and I tumbled out of the truck at one point, fighting a panic attack from the lack of oxygen in such a confined space. Even with the windows open, it felt impossible to breathe. I stood in the dark and watched the stars overhead, ringed with thunderstorms all along the horizon.

Steps to the overlook.

We woke to rain. Got ready in the rain. Gave up on trying to make my hair look anything less like a rat’s nest before visiting the library. And left Nata Bird Sanctuary – planning already to go back.

Some rough driving led to part of the front fender coming off.

Steve, delighted, gets the truck to “flex”.