Route: We drove from the Suam border with Kenya, northwest to Sipi Falls. Then from Sipi we drove southwest via Kampala to Lake Nabugabo, southwest to Lake Bunyonyi, then due south to the Cyanika border with Rwanda.

Travel Distance and Time: Approximately 840 kms over six days, including two nights at Sipi Falls, and two nights at Lake Bunyonyi. We traversed the country fully from east to west.

Borders: We crossed into Uganda at Suam – a very quiet, very small border. No one else was there, in fact. There were no big trucks or other craziness. We were able to change money on the Uganda side. Prices were reasonable and the process was quick. It took us about 30 minutes and the TIP was $20 USD; visas $50/pp single entry for 90 days. The immigration guy was a bit confused about our Kenya visas, because we stamped in AND out at Suam on the Kenya side (see the Kenya post), so we had to explain that situation. Customs was very friendly; they never even looked at the truck. Crossing out of Uganda, and into Rwanda at the Cyanika border, we spent a grand total of 3 minutes and 45 seconds in customs and a police check. It was the easiest exit we’ve had. Emigration and immigration for Uganda and Rwanda take place in a one-stop office on the Rwandan side of the border.

Getting ready for Christmas dinner with a Kenyan tablecloth, Ugandan avocados in a local Sipi-made basket, and custom Christmas mugs by our friends at Road Beneath Our Feet

Roads: We wondered at first what we had gotten into. The road from Suam to Sipi is an extremely rough, extremely steep mountain pass. We spent three and a half hours going about 75km, with lots of mountain climbing, switchbacks, and off-road-style driving. Based on the reactions of the locals – either enthusiastic waves or looks of sheer confusion – we guess that many muzungu don’t drive this way. In fact, as we left Sipi we were talking to a local tour guide, and when we told him how we came in, he looked at us, smiled knowingly, and said, “so, tell me how that went for you.”

You have to be really prepared to drive this road. There were lots of motos and some 2WD combis making the drive, but it will be a long ride on two wheels. Also, if you enter Uganda from this direction, try to cross the border earlier in the day (we left customs at 3:15pm) so that you have plenty of time for the drive to Sipi. All that said – it’s a very rewarding drive, with spectacular scenery and friendly villages lining the path. It’s one of those roads that overlanders live for.

Otherwise, roads in Uganda are absolutely excellent – a dream to drive on. They’re wide, have good shoulders (have actual shoulders), and are largely well paved with no potholes, and passing lanes are plentiful. There is very little livestock or pedestrians on the road relative to Kenya and Ethiopia. Drivers are very good, though one thing we can’t figure out is the turn signal rules. A right hand turn signal might mean: it’s ok to pass, it’s not ok to pass, I’m going to pass someone, I’m going to turn right, I forgot to turn my blinker off.

We crossed the equator in Uganda!

Police stops: Several were set up across our east-to-west route, but we were never stopped. In fact, not a single police officer even bothered to look at us.

Camping: We spent two nights at the Crow’s Nest in Sipi village. We camped on a terraced lawn and it was shady and cool. The bar had a lot of character, and great views of the falls. A major downside was the club about half a kilometer down the road, which pumped music from noon on Christmas day to 7:00am the following day. Honestly, we may have well been IN the club it was so loud. If we hadn’t had to drive the next day I would have given into my travel philosophy of “if you can’t beat ‘em, join ‘em” – but we were too damn tired. 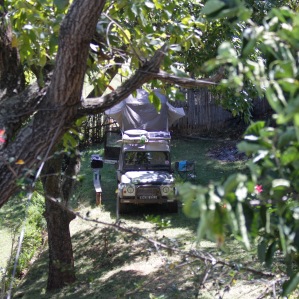 Campsite at the Crow’s Nest 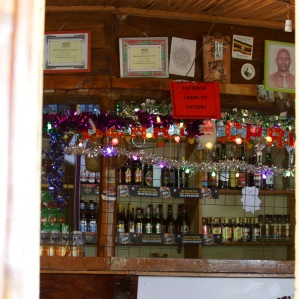 Festive holiday bar at the Crow’s Nest for the holidays

The next stop was Nabugabo Holiday Centre, on the shores of Lake Nabugabo, which seems like a family retreat place – sort of like Indian Ranch in the town where I grew up in Massachusetts. There were lots of families swimming and having picnics and camping. Plus – wifi! It worked, slowly, if you sat with your back up against the main office building and prayed fervently that messages would be sent. No bar, but they will bring drinks to your tent if you want. We met a family from L.A. who was visiting – the dad grew up in Uganda and used to come to the Holiday Centre as a kid. He told us, “watch out for the hippos. They used to say that Idi Amin killed all the hippos, but they’re back now. Don’t worry though – they won’t bother you.”

The last stop was the Amasiko Homestay on Lake Bunyonyi in the far west. It’s run by a European expat who came to Uganda for a year, got married, adopted a daughter, and never left. It’s 19km on a really rough dirt track from the town of Kabale, but you’re rewarded with gorgeous views of Lake Bunyonyi, which is nothing short of spectacular, ringed with mountains and forests. The camp is just outside the registration office, with gorgeous views of the lake. Two dogs on-site will come and visit, as will local kids selling baskets woven by their grandmother (they’re very pretty and a great deal if you’re looking for something handmade and want to know the artisan). There are cabins for rent, a donkey shower, and eco-compost toilets that are clean and smell-free.

General comments: We loved driving through Uganda. It is probably our favorite country so far. The easiest way to describe it is to imagine that Montana and Ireland had a baby – it would be Uganda. Gorgeous mountains, shifting cloudy skies, and lush, lush green forests. There are banana plants and cultivated land everywhere and every turn reveals an even more beautiful view. The roads, as I said, are excellent, as are the drivers. People here are extremely friendly and very, very nice. Ugandans seem to smile with their whole faces – right up to their eyes. It’s easy to smile back or strike up a conversation. Relative to Ethiopia there is very little begging, and I got the sense that, even though I know prices were jacked up for us, they weren’t nearly as much as they were in Ethiopia. 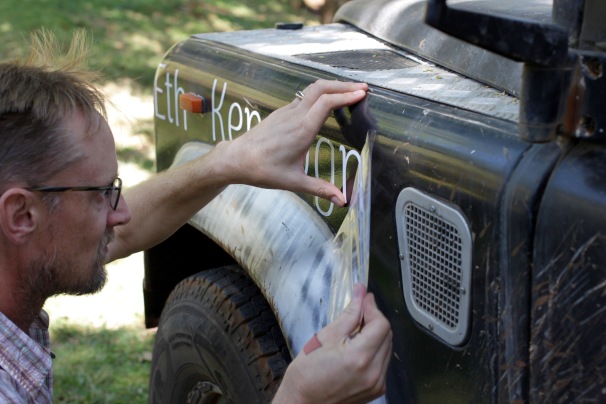 Uganda goes on the Defender