There is something concentrated, something intimate, about being with people on the trail.

Presenting at Overland Expo East meant that, in addition to spending the weekend out among “our people” (more on that in a later post), we were able to connect with our friends Britta and Jeffrey in Asheville, North Carolina.

We’ve known Britta since 2009, when we started meeting weekly as part of a supper club back in Missoula. These Tuesday dinners turned into a central part of our lives, and Britta was one of the original crew. She’s been there from the start and is one of those friends who, even after months of not seeing each other and not even regularly talking with each other, will spread out a futon, cook up some local veggies, pour generous glasses of wine, and sit down at the table with you like it is any old Tuesday back in Montana. This is the woman who builds straw bale houses. Who backcountry camps in Denali – alone. Who paints and photographs and finds wonder everywhere. Britta, with her musical voice and throaty laugh and artist’s eye is, perhaps, the baddest-ass I know.

Reconnecting with Britta also gave us a chance to spend more time with her partner, Jeffrey. Jeffrey: urban farmer, rabbit-raiser, asker of questions and font of soft-spoken knowledge. On our last night in Asheville, walking home from a bar downtown, he asked Steve how much rainfall Missoula gets. And here’s the thing – he actually wanted to know. In that moment it dawned on me why I like him so much – he’s curious about the world. Actually, genuinely, curious – even about the small things. I love this. I put a high value on people who want to learn things, who want to explore. Jeffrey is one of those people. I probably should have caught on to this character trait when he joined us for a wicked desert backpacking trip in Utah last April, never having met us, never having been to Utah, never having been backcountry camping in the desert. That was the start of what I’m coming to value more and more as a new friendship in our lives.

He returned the favor of that backpacking trip by taking us hiking in the Pisgah National Forest and Shining Rock Wilderness the day before the Expo. It is a beautiful land, rolling hills alternating with legitimate mountains, all blanketed in trees starting to turn. The Pisgah National Forest stretches to over half a million hardwood acres and was home to the first Forestry school. It was sold to the government in 1916 by Edith Vanderbilt, a broken off piece of the Biltmore estate. Shards of mica sparkled on the path and clusters of red berries crowned the mountain ash. The trail was lined with towering rhododendrons and we wandered in and out of clusters of hemlock trees, some of which are struggling mightily against wooly adelgid infestations. 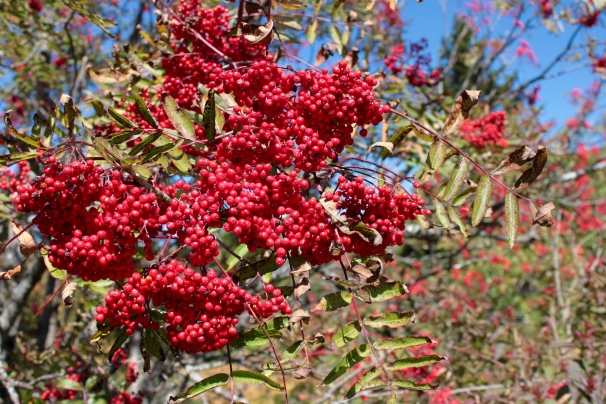 The chance to see the country Jeffrey grew up in, the country he loves so much, the country Britta inhabits now, was a big deal for us. There is something concentrated, something intimate, about being with people on the trail. The whole time we were hiking, even while I was admiring the mountains of North Carolina and reveling in the slanted light and sweet dry smell of an east coast autumn (which I still get homesick for every year, no matter how much I love the west), I was thinking about Britta, and Jeffrey, and friendship, and how fortunate Steve and I are to have people in our lives who will pour the wine, ask the questions, and lead the way down new trails. 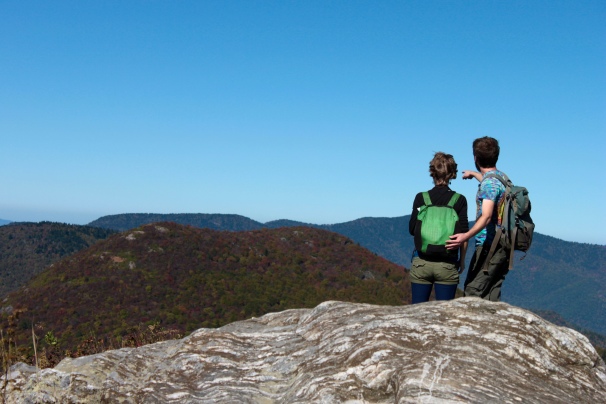 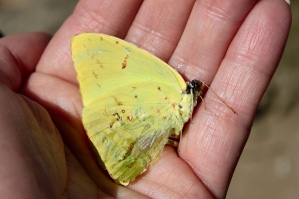 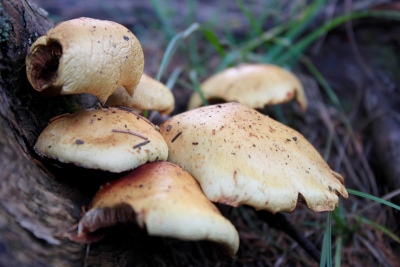