"Driving is a spectacular form of amnesia. Everything is to be discovered, everything to be obliterated."

US89A: Speed and Distance in America

The A stands for “alternate”.

US89A is a meandering, shoulderless, shimmering ribbon of indifferently maintained tarmac that traverses some of the most striking country in the Lower 48.

Rolling south from Kanab, Utah, and ending 92 miles later at Bitter Springs on the Navajo Nation, US89A used to be the primary highway linking Flagstaff and Page, Arizona to southern Utah. In many places, US89A feels like it has no destination at all. It encourages you to see the road for itself, not for where it is taking you, which is a wonderful thing.

In 1960, a new section of highway, which would become US89, was completed further north – wider, faster, straighter, more efficient. The original road was relegated to “alternate” status. To me this is a very distinctly American thing to do. Having a perfectly serviceable and very nice highway, somebody looked at the map and said, “Well fellas, I think we need another one right next door. Get to it.”

On the eve of our departure for Africa, I had been feeling nostalgic, and more than a little bit wistful about this crazy, wonderful, frustrating, incredible thing we call “America”.

I had been itching all spring to hit the road. The winter this year in Montana never seemed to end, and I hadn’t seen the desert in nearly a year. I wanted to get out, to be drawn into the sand and the hard light. To take the back roads and find the lonely places, both new and familiar. To find what the French philosopher Jean Baudrillard, in his slim travel memoir America, calls “astral America” – the America of the stars:

I wanted to see astral America, an alternate America.

So the second week of May I loaded up the Jeep, queued up a few hours worth of Magnolia Electric Co., and set the compass south for Arizona, and Overland Expo West.

This trip is documented in three parts: part one, the mad hammer-down 1000 mile dash I made in two days to get to Flagstaff, and parts two and three, the more deliberate and dusty return trip through Utah back to Montana.

I hit the road mid-week (and later than I wanted) on a diamond-perfect day that makes you wonder why you would ever leave Montana in the first place. But also a day that rewards your decision to take the wheel and pile on the miles.

A few things I saw as I ate up the interstate in Montana, Idaho, and Utah: 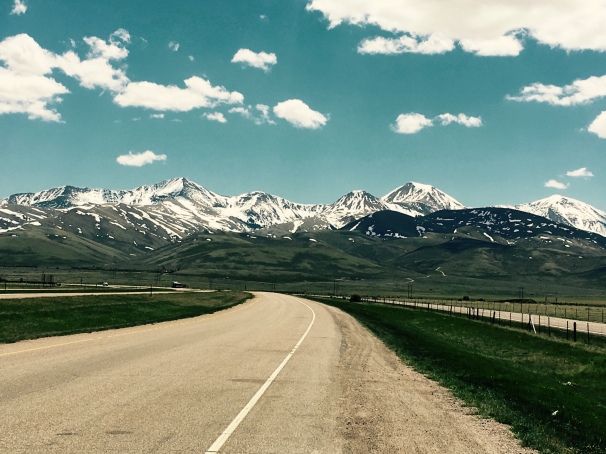 I managed to hit Salt Lake City right about rush hour due to my late start and a lot of road construction in Idaho, but the traffic wasn’t terrible, and soon I cleared the congestion and was flying south again.

But with two-thirds of Utah dispatched, daylight was running low and I was getting road-weary, so a camping spot was in order. I pulled over to scan the atlas for public lands with promising options and zeroed in on a US Forest Service access road about 15 miles east of the highway near Kanosh, Utah. 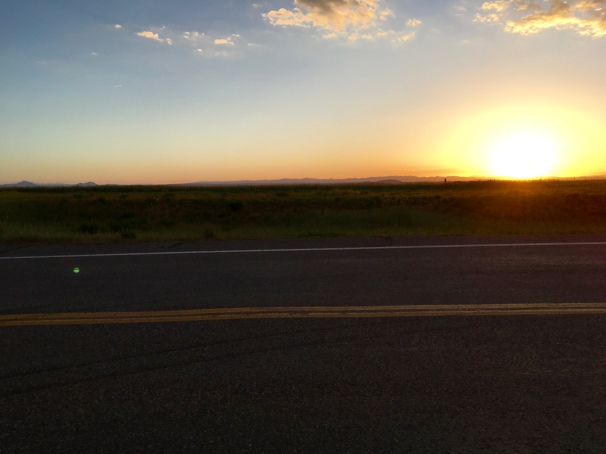 Sun setting fast over the western desert of Utah.

This was the Fishlake National Forest and it felt good to put wheels to dirt after a long day on the super slab. Not wanting to spend a lot of time hunting down a good campsite with darkness closing in, I had identified a formally designated campground as my best option.

Unfortunately, the self-pay kiosk at the campground was asking $12 for a campsite, and I only had $50’s (Like, three of them. That’s how I roll). I was not about to leave a $38 tip to the Forest Service no matter how much I like them, so I backtracked a few miles and found a dispersed campsite in a secluded grove of elm and cottonwood trees by the north fork of Corn Creek. I was completely alone.

I finally switched off the Jeep as night fell. The creek was running high, and it made a pleasant, soothing sound, not unlike the rumble of my A/Ts on the highway, but far more relaxing. I slurped noodles from a styrofoam cup and studied some options for my return trip that would take me to more secluded spots like this one. 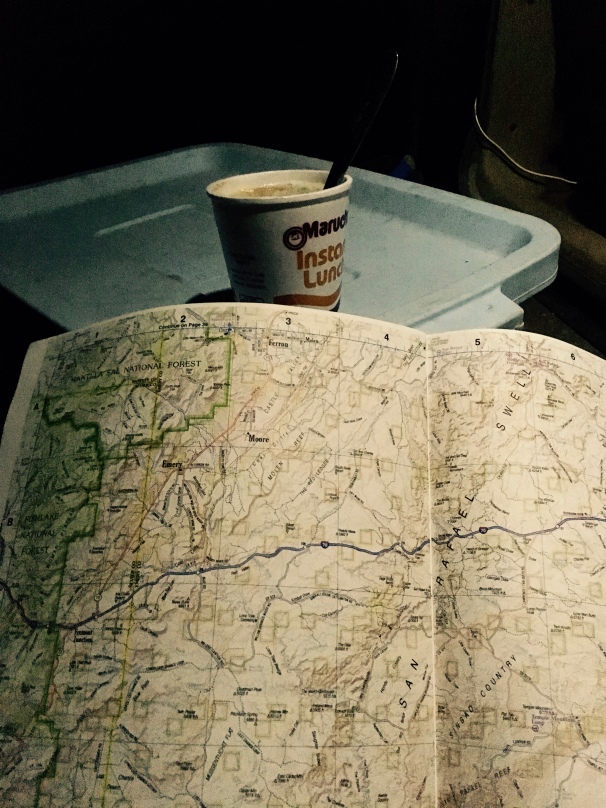 Enjoying a nutritious evening snack and plotting my fun in the warm glow of the LEDs on the hatch. Sometimes you need a big-format map to see the big picture. I have always wanted to visit Sinbad Country.

I woke the next morning before the sun came up, and got to work brewing coffee and folding up the tent. As the first rays of sunlight spilled over the ridge immediately to the east, I finally got a decent look at my impromptu campsite. 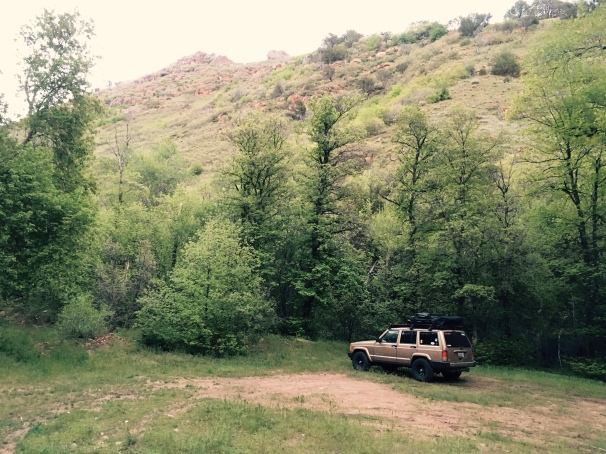 My campsite the previous night, minutes before my dawn departure. Fishlake National Forest, near Kanosh, Utah.

But there wasn’t much time to linger – I needed to be in Flagstaff close to noon to register and guarantee a decent campsite at Overland Expo, so I turned south again and joined the long-haul truckers chasing the sunrise on I-15.

As I drove along, I began to see them: overlanders.

I had passed a handful the day before, all decked out in roof-top tents, off-road trailers, and Hi-Lifts, or riders leathered-up on dual-sports. But as I got closer to Arizona, they began to multiply, merging together from all directions.

They were all clearly headed to Flagstaff, but in their haste or laziness most had camped the previous night just off the highway in the barrow pits and gritty turn-outs.

I was feeling pretty smug since I had managed to find a genuinely wonderful campsite in the woods, and I was awake and on my way well before the others scattered haphazardly across the interstate exits. Amateurs.

Onward. Utah State Highway 20 connects I-15 to US89 in the Panguitch Valley – which would take me all the way to Flagstaff. It climbs steeply into the Tushar Mountains, the pass topping out at nearly 8000 feet. As I pulled into the lookout at the summit, the grand diversity of Utah landscapes stretched out far below me, and, also… some clouds that had well and truly lost their way?

The valley appeared to be completely socked in.

Viewpoint from the pass on Utah Hwy 20, looking east into the Panguitch Valley – is that fog?

If it’s not fog, those clouds have no idea what they’re doing.

I laughed out loud at the absurd shift in the weather – this was genuine pea soup, where just minutes before the sun was burning a lopsided tan on my left arm dangling out the driver’s window. I dropped my speed as I wound down the thousands of feet on the far side of the pass and hoped that it would burn off soon. I hated to miss any of the scenery, but I appreciated the novelty of parting the clouds at ground level.

And burn off it did – just north of Kanab, Utah near Coral Pink Sand Dunes State Park. I idled into Kanab, filled the tank with 89 octane and the cooler with ice and beer, and had a decision to make: US89 via Glen Canyon, and Page, Arizona, or the old highway, US89A through the Vermillion Cliffs and the Navajo Nation? 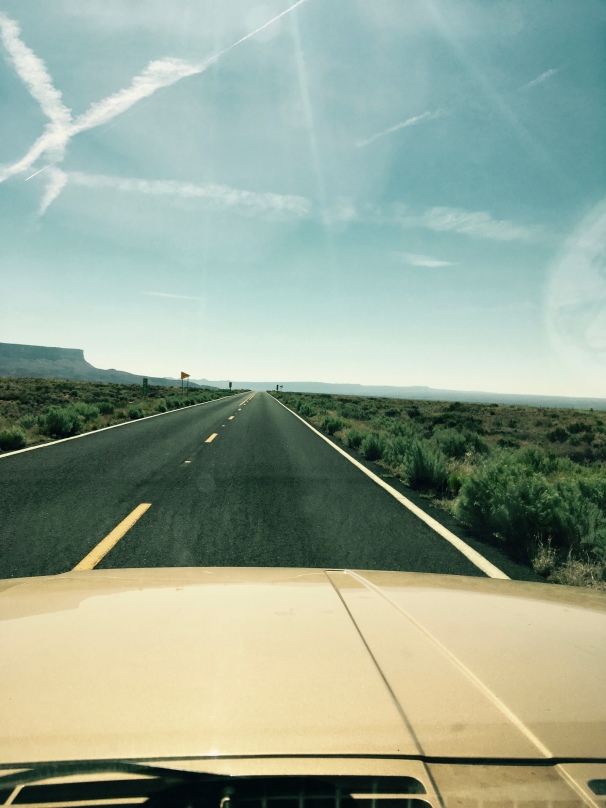 America. Speed and distance from the behind the wheel on US89A in northern Arizona.

US89A is a mesmerizing combination of twisty, broken pavement at high altitude among Ponderosa pines and fire-scorched forests, vistas almost too far and stunning to fully comprehend, and hypnotizing straights that invite foot-to-the-floor flirtations with danger and oblivion.

The speed in particular draws you in – the six-cylinder in the Jeep has a sweet spot in the powerband just north of 2500 rpm, right about where it sits at 80mph in top gear. So if you’re tempted to lay on the throttle, you can produce downshifts and speeds upward of 90mph very quickly before smacking into the aerodynamic limits of the box. It’s tempting, but not really warranted, especially in a land with no shoulders and little margin for error.

Speed is the triumph of effect over cause … Speed creates a space of initiation which may be lethal; its only rule is to leave no trace behind. … Driving like this produces a kind of invisibility … [i]t is a sort of slow-motion suicide. …

Driving is a spectacular form of amnesia. Everything is to be discovered, everything to be obliterated.

Here is the conflict I grapple with on highways like this. I am torn between pure speed – which the road and the landscape invite – and taking my time to see and feel the experience more carefully.

For me, all too often, the speed wins. That interesting historical marker? Yeah, it’s history. That scenic overlook? Overlooked.

For the many Navajo craft shops that line the shoulders on US89A – dusty, ramshackle lean-tos – the speed has been too much for them, too. Most are now vacated, their proprietors and wares swept up by the gift shops and ignored by the tourists (like me) roaring by at 80mph, bent on discovery or amnesia. 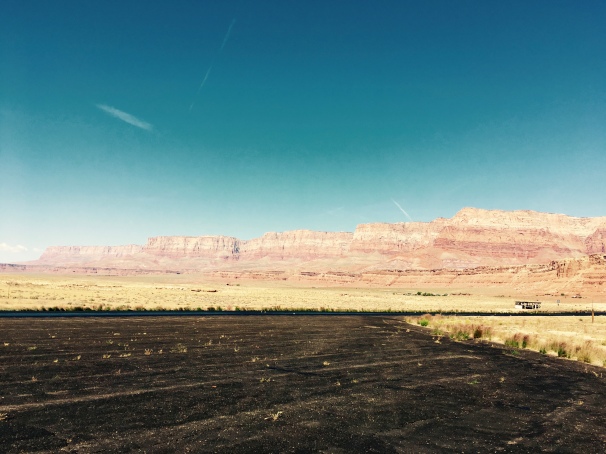 Headed south on the blacktop to Flagstaff – Navajo Nation.

As the the sale of baskets, jewelry, blankets, and other traditional goods on the Navajo Nation has centralized, a large majority of the old road-side sales stands have been abandoned.

But this was clearly a fat year.

The desert was green and lush, drawing stark contrasts with the high red cliffs and buff sands. Content calves, kids, and foals romped across the sage bottomlands. The cacti, creosote, and bunch grass were blooming, alive and well for that short time before the real heat arrived.

Even the strays were fat and happy.

Looking north toward Utah and the Kanab and Kaiparowits Plateaus in the distance from the lookout on US89A in Arizona.