When we visited Botswana in 2015, I got a lot of mileage out of not seeing lions. It was a bummer for a while but, as I live mostly in my head anyway, I’m always looking for the story I can tell myself – which often comes when things don’t work out the way you expect. Turns out, this was a story I could tell other people, too. I knew, even as we were traveling and not finding lions, that I would be able to write about it. In fact, I remember the moment I realized that. The essay came easily to me and I wrote it partially as a way to process having to leave southern Africa and go home. It ended up being published in an international magazine.

Well, the story’s changed. We saw lions, on Christmas Eve morning, in the Kgalagadi Transfrontier Park.

It was fucking epic.

We spied a lone female resting under a bush, on a trail not many people drive because the game isn’t that good. We were staring at her when we happened to turn and look out the opposite window only to see her sister, standing on a ridge. She paused for a minute and then made her way to the watering hole, then to the shade. She’d clearly come from a recent kill – belly distended and sides sleek with blood. As she got to the shade, her sister got up and went to eat.

We watched them for a long time. Male lions are impressive, and we’ve seen a few of them too, but I have a soft spot for sisters. 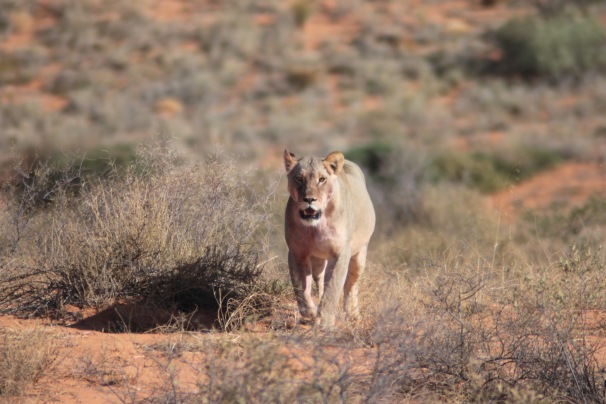 Later that trip we saw two cubs and mom in the Kalahari, napping under a tree. We sat and watched them for hours, and it was exactly as interesting as watching a house cat sleep, because that was all. they. did. The most activity we saw was when mom got up to change positions. Exciting. No, really. It was fantastic. Beats watching TV, any day.

I’d love to see them active, but seeing them napping is still pretty awesome. The famous black-maned Kalahari lions are bigger than their cousins elsewhere. Interestingly, lions prefer the food they grow up eating, and Audubon says that “customs differ among prides.” The females stay together, reproduce together, and nurse each others’ young. They are, according to Audubon, the only truly sociable cats and females will remain in their mothers’ territories unless food runs out.

We haven’t heard them roar, but we have heard grunting from them in the Kalahari at night. They make a sort of huh-huh sound and we had no idea it was lions until a guide we were with told us.

I have managed to get a few photos of them, but nothing compared to what they actually look like. The story’s in pictures, this time.

Look closely – her sister is using her for a pillow.