Into the wild in Botswana's rainy season.

There aren’t really “seasons” in Botswana.

At least, there aren’t seasons in the way that newcomers from the upper reaches of the northern hemisphere think of them. In conversation the ideas of spring or autumn draw confused and blank looks from the locals, and I constantly make the mistake of referring to June, July, and August as summer.

Elephants go wherever, and do whatever, they want. Makgadikgadi Pans.

We are actually headed into winter now in the southern hemisphere, and besides the noticeably shorter days and long-angle light, to the untrained eye there’s not much to distinguish the day-to-day weather of the world in May from that of October. High temps in the 80’s, lows in the 50’s. Sunshine. Lots and lots of sunshine.

But there are subtle markers of seasonal shift, if you pay close attention. The nights in April started biting a bit, and we pull the comforter up closer to our noses now. Our fans are idle, collecting dust. The ceramic tile floor in the apartment is shockingly cold on bare feet in the early morning. The leaves of some trees are actually starting to turn, grasses are browning and becoming brittle, and new birds are passing through on migration, tracing the memories of countless generations before.

What we might think of as winter – from a purely axial point of view – is to the Batswana, the “dry season”. Landlocked and home to tens of thousands of square miles of deserts and salt flats, Botswana is one of the most parched nations on the planet. There are no permanently flowing rivers within the boundaries of this country. The Zambezi and Limpopo mark small swaths of Botswana’s northern and southern boundaries, respectfully.

Ahead of the storm. Makgadikgadi Pans.

The clear waters of the Angolan highlands run south through many channels to the Okavango Delta. The Delta in turn feeds the beautiful Boteti River, which disappears underground into a vast network of dry salt pans. Sometimes. In many years, there is no Boteti River – only a wide dry wash.

Following a number of years of serious drought, water shortages, empty reservoirs, and agricultural heartache, starting in 2015 Botswana has enjoyed a succession of relatively wet “rainy seasons”. Stretching from November to May, the rainy season is characterized by unsettled weather, high humidity, frequent and often violent thunderstorms, and surface water swelling from sources beyond Botswana’s borders.

Just like in parts of the American west, a surplus of water in the desert here creates fascinating tableaus: plants spring to life, wildlife is on the move, low lying geographies are inundated. There are frogs and flowers where you least expect them. 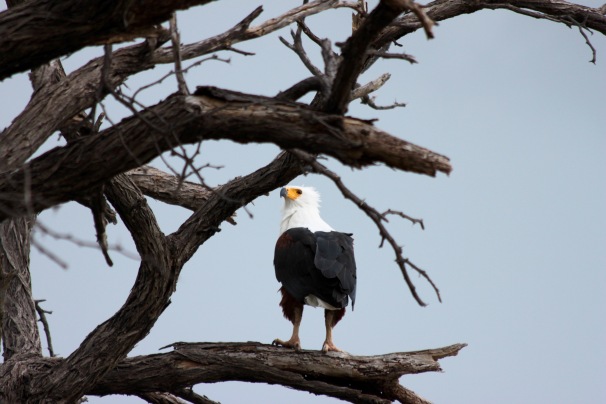 At the tail end of this year’s rainy season we traveled north to Nxai Pans and Makgadikgadi Pans National Park. This vast network of grasslands, velds, river courses, salt pans, and outposts of Baobab trees is one of the largest intact ecosystems in all of southern Africa. All that water made for a very interesting adventure. 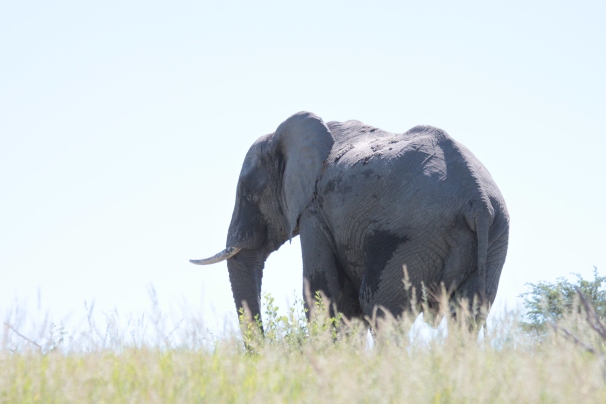 Our first wild campsite was located deep in the Makgadikgadi Pans at a place called Tree Island. Surrounded by seemingly endless miles of grasses that reached over three feet high, the Tree Island campsites overlooked normally dry pans that were filled to the brim, hosting storks and rare marsh owls. In the evening, thunderheads gathered on the northern horizon as we prepared our camp, and the storms raked us with bands of rain throughout the night. 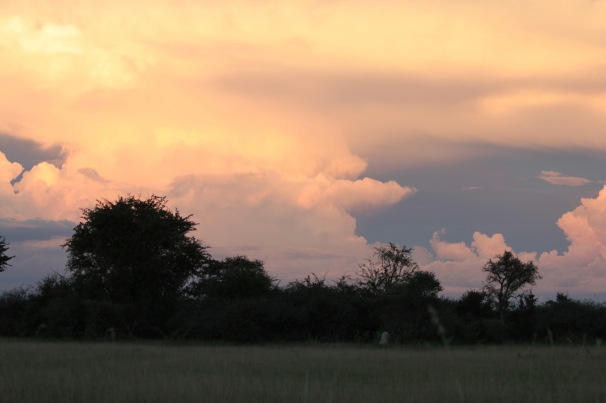 In the next morning’s humid aftermath, we set out across the plains where gemsbok and elephants roamed in a prehistoric set piece. I half expected at any moment Cro-Magnons to leap from the brush brandishing atlatls at our big blue Mitsubishi. None materialized, but we did have a close encounter with an elephant who, despite the unlimited 360 degree horizon, refused to budge from his spot near the road. With fingers crossed, we took a chance and sped past the bull, who was less than impressed.

Maybe a little too close for comfort. Makgadikgadi Pans. 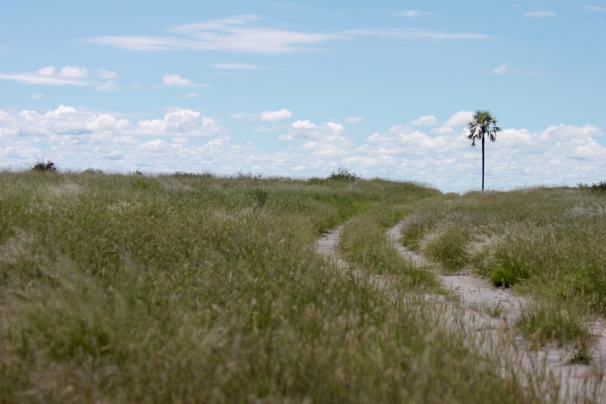 The legend is that Arab traders who crossed central Botswana hundreds of years ago discarded their date seeds across the pans. The result are these widely spaced palms that seem like pins pushed into a vast map. Makgadikgadi Pans. 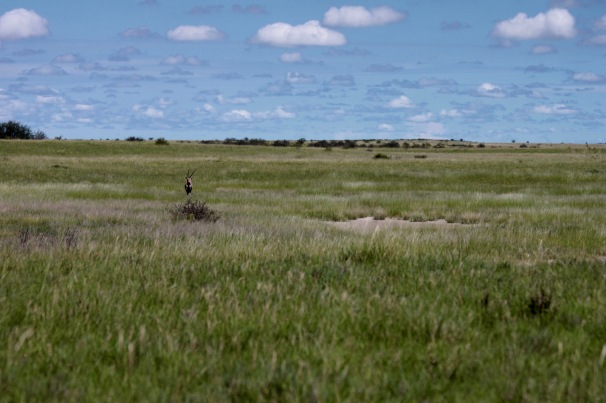 Moving north to Nxai Pans, just a few kilometers away, the ranger at the entrance gate told us that the campground where we had booked two nights had flooded. She wasn’t exaggerating – half the campsites were uninhabitable, and the entire compound was covered in up to two feet of water. The previous days’ storms had made half the Park inaccessible, and we were directed to share a campsite with another party, two women from England on the last legs of a long adventure throughout east and southern Africa. The South Africans in the next plot, who were sleeping on the ground, had awoken the previous night to knee-deep water streaming into their tents. Sleeping bags, blankets, clothing, and tarps were spread out in the late afternoon sun, drying in their new campsite on higher ground. 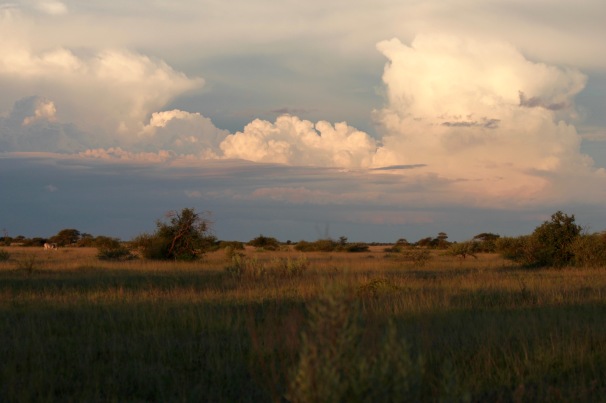 Taking in the Baobabs, fighting the mud. Nxai Pans.

After helping a Dutch couple a few campsites down the road change a flat tire on their rented Land Cruiser, we took a game drive. The roads were some of the muddiest and most challenging we have encountered anywhere. But the Baobab trees, giraffes, elephants, and zebras made up for it – a quintessentially African evening in the wild.

The following day we set out on a different direction, hoping to catch sight of the family of cheetahs that many of our campmates had encountered in days prior. For the first time, we managed to get the Pajero mired in the muck. Traveling down an increasingly muddy and waterlogged track, where the puddles were getting deeper and more frequent, we made the decision to turn around. In pulling off my three-point turn, I managed to dip the left side of the truck into the bottom of a big hole, leaving us well and truly beached.

Thankfully, the traction boards I had bought for our Central Kalahari trip a couple of weeks earlier paid off. After a bit of shoveling, and with one board under the right rear wheel, and one under the left front, the Pajero freed itself from the pit with a single stab of the throttle. This worked so surprisingly well that I ran headlong into a large thorn bush along the side of the road, dislodging our front license plate.

Frontrunner Sand Lizard traction boards do the job in mud, too.

A “tower”, a “journey”, however you want to call it, a group of giraffes is an amazing thing to behold. Nxai Pans.

After successfully returning to the campsite, we decided to head south toward the famous Baines Baobabs, where conditions were less muddy, though no less wet. Hundreds of frogs covered the tracks, and scattered from the deep puddles when we crashed through. Tall grasses lined the road, and the approach to the Baobabs required a long water crossing. The salt pans that had been bone dry when we visited them three years ago were full of water. Dry season or wet, Baines Baobabs is one of the most beautiful corners of Botswana.

These frogs were everywhere. It was a chore not to squish them. Nxai Pans. 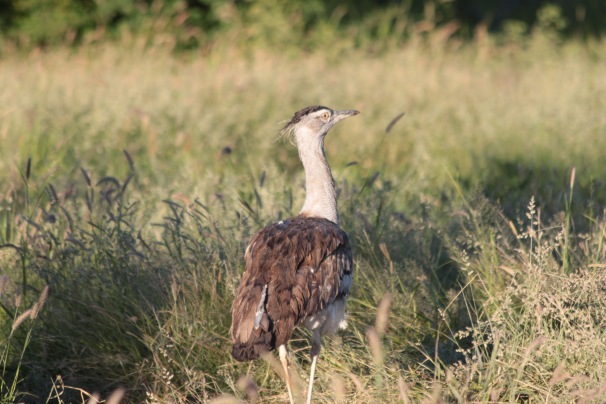 The rains now have subsided. Nowhere was this more apparent than at the ferry across the Boteti River near Khumaga – the southern gate for Makgadkigadi Pans National Park. In drier times, you just drive across the barren riverbed. With the water levels currently high, but dropping, a ferryman takes you across the river on a rusty, though suitably buoyant two-car barge. We wondered, though, what would happen once the water was too low to float the ferry, but not low enough to cross on wheels.

The rains come, and the rains go.