In June my good friend Tobin shared some photos from a backpacking trip he took with his wonderful wife Cheryl in Montana’s Rattlesnake Wilderness. The experience was so arduous and borderline miserable that Cheryl claimed she would never again shoulder a pack.

“Why?”, I asked. It turned out they had crammed 17 miles into 24 very cold and wet hours with heavy packs, and it was the first hike of the season for both of them. It would turn anyone with half a rational brain off wilderness camping.

So I harangued Tobin on Facebook for being too aggro:

Two months later, Tobin and I laced up boots and headed up Straight Creek, into the Bitterroot Mountains of Montana’s Lolo National Forest on a hastily planned backpacking trip of our own.

On only our first day, when I found myself on mile eight, with two more yet to go, feet bleeding and legs failing as we crested Chilcoot Pass at 7000 feet of elevation, I cursed my hubris. I can’t even remember if I apologized to my friend out loud, or just in my head.

Unfortunately, I too have a history of biting off more than I should probably chew when it comes to backcountry expeditions – as many of my friends will attest. There are backpacking trips in my past that are generally spoken of only in whispers. “Death Marches”, some have called them, as they stare into the middle distance. It’s the suffering that makes the experience transcendent, right? 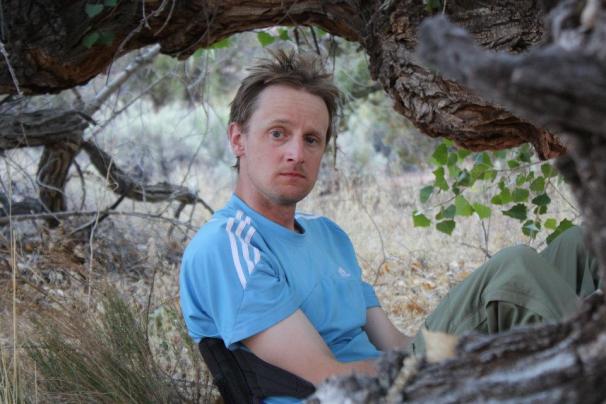 But the Straight Creek trail, Tobin and I agreed that evening, as we vainly doctored the mangled stubs that used to be our feet, may have been the single hardest day of backpacking either of us had ever experienced. Nine deep stream crossings, washed out trails, thousands of feet of elevation gain and loss, bushwacking through overgrowth and clambering over deadfall, the almost imperceptible but relentless climb to Chilcoot Pass, that, in good Bitterroot fashion, ended in a headwall that climbed 600 feet in only one half mile, and barely a switchback to be seen. I hadn’t been on a trail in nearly 20 months. 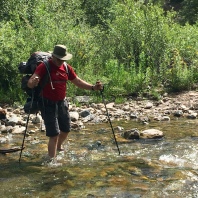 Tobin on the first of many, many stream crossings. 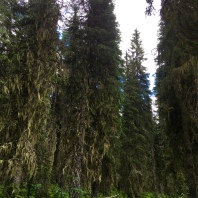 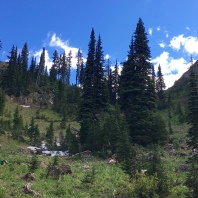 I relay to you these tribulations not so you may wonder at my stamina or backcountry acumen. But rather so you may gaze upon my folly, heed the advice I so flippantly imposed on Tobin just weeks earlier, and learn for yourself. Clearly I haven’t.

That said, there are only a handful of people on this planet I would gladly share such hardships with. Tobin is a fine trail partner – he is optimistic, well-paced, and a great conversationalist, but he also knows intuitively when to let the silence of the wilderness take hold. 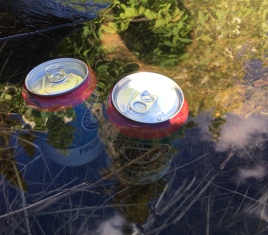 Beer is heavy in the pack, but worth its weight in gold at the end of a long day.

The view south to the Bitterroot Mountains, Chilcoot Pass

And what a wilderness it is. Straight Creek trail, and the loop we made back to our starting point at Clearwater Crossing on the West Fork trail are both situated within the proposed Great Burn Wilderness Area. Ancient, legacy stands of Western Red Cedar tower over the stream bottoms, and massive ferns, those prehistoric forbears of almost all plant life, grow riotously on the hillsides. We trudged briefly through the last of the year’s snows, enduring in small patches at 7000′ feet, and small trout rose in the rock-bound Lower Siamese Lake, so clear we could see insects scampering along its sandy bottom, over 10 feet deep. 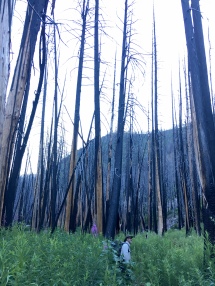 Bear sign was plentiful, but we never encountered them.

Getting ready for dinner.

We camped (“collapsed”, might be the more apt word) our last night on the shore of perhaps the greatest natural swimming hole in all of western Montana, beneath those great creaking cedars. All this self-imposed suffering – too many miles, too many vertical feet, not enough time – is more than worth the precious few days in these wild places.

The Great Burn has been in the proposal stage as an officially designated Wilderness Area for nearly forty years now. It would form a vital link in a nearly unbroken wilderness ecosystem that stretches along the entire crest of the Bitterroot Mountains. We need more protected wilderness areas in the United States, at this time more than ever.

As I have argued before, the age of land poverty is upon us. We should all give something up, and suffer just a little bit for the future of wilderness, even if it doesn’t involve blisters.